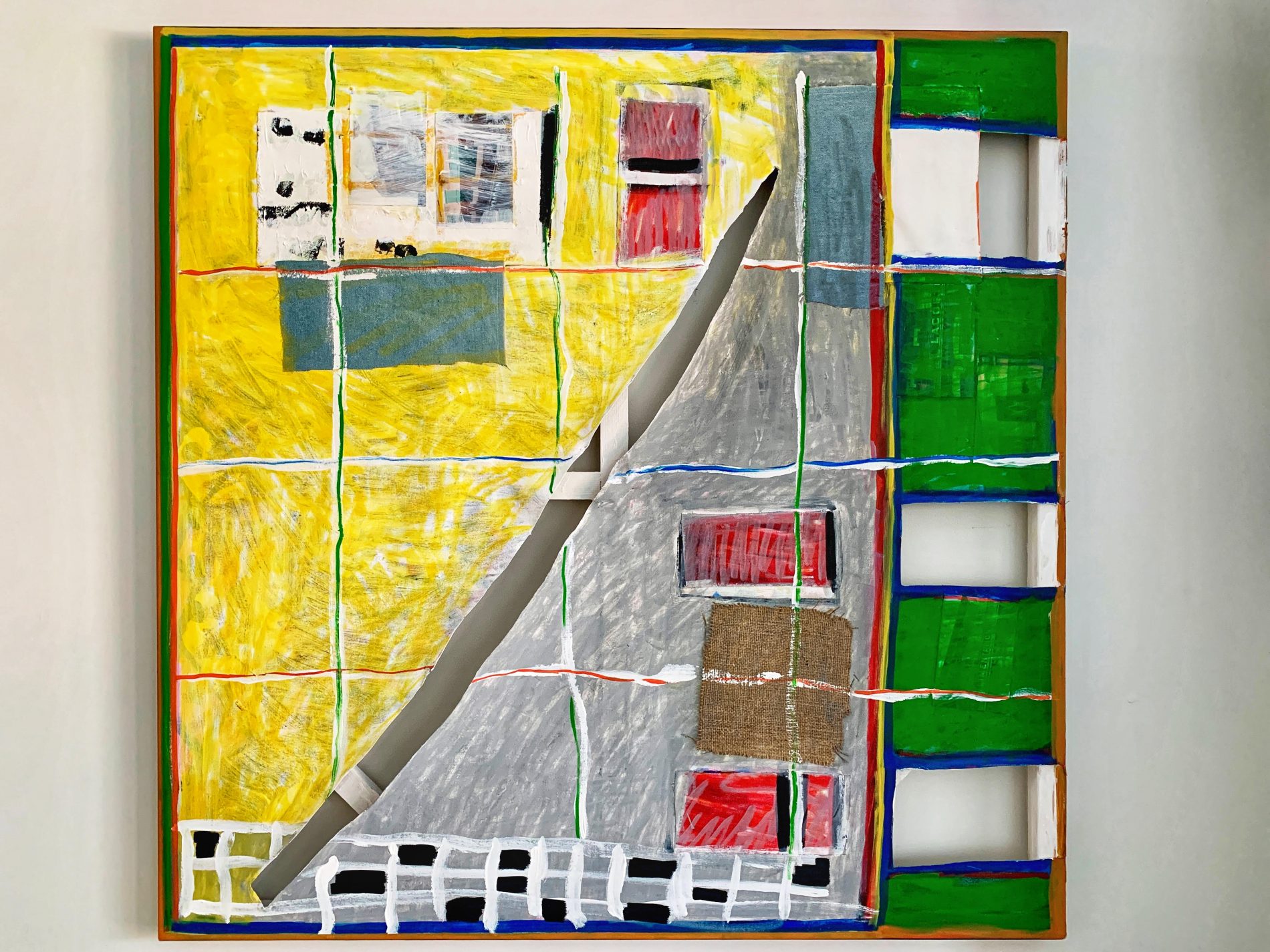 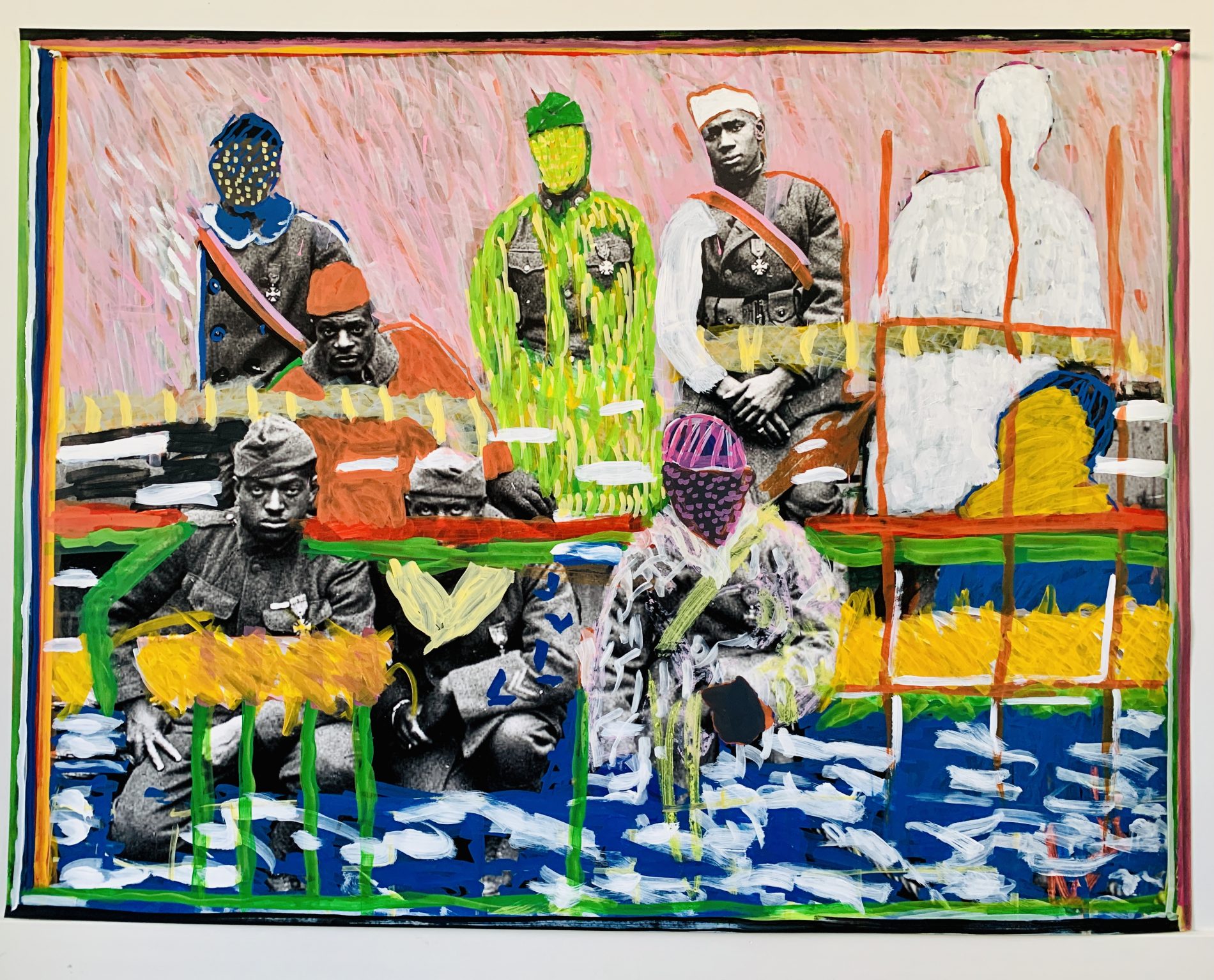 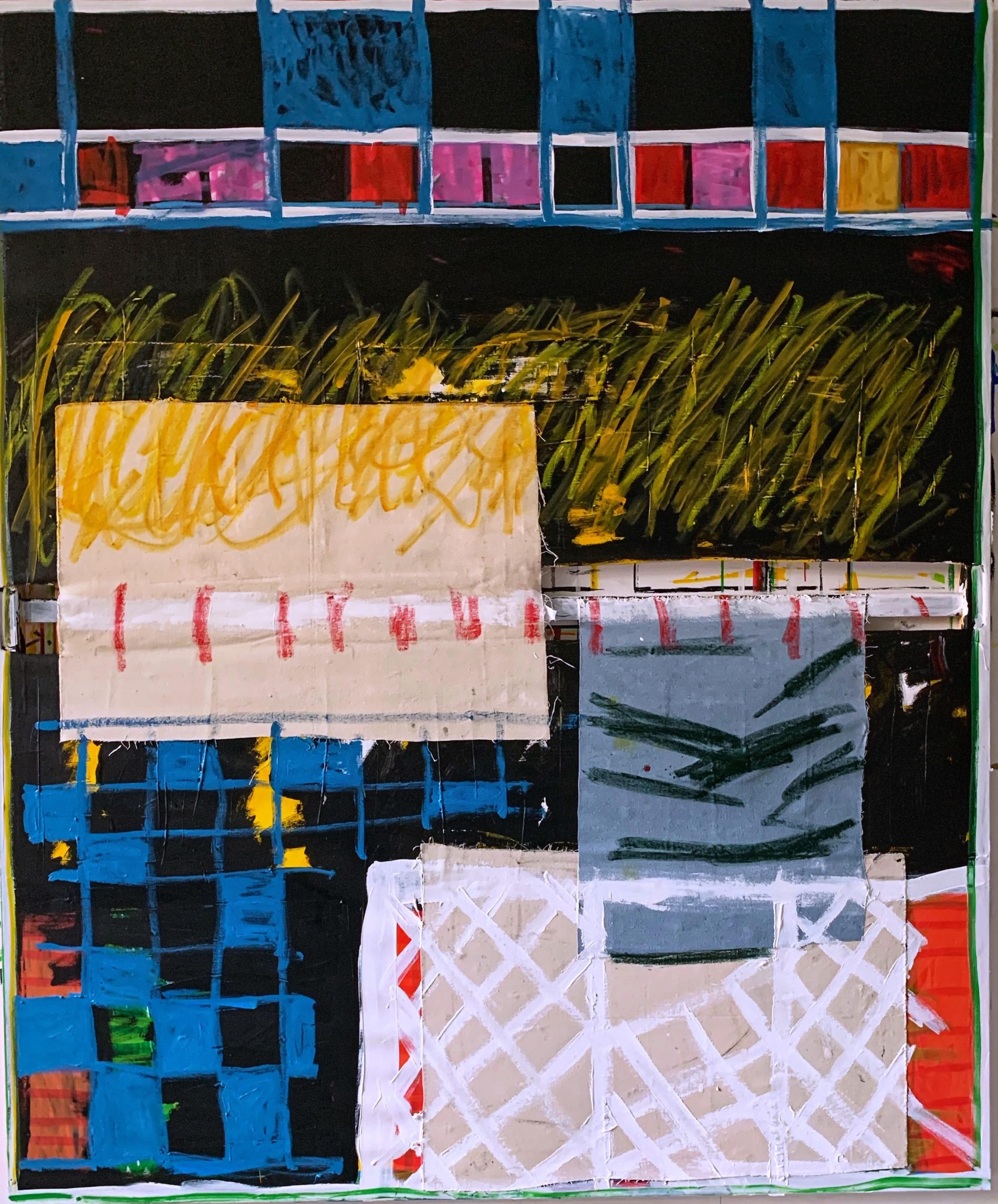 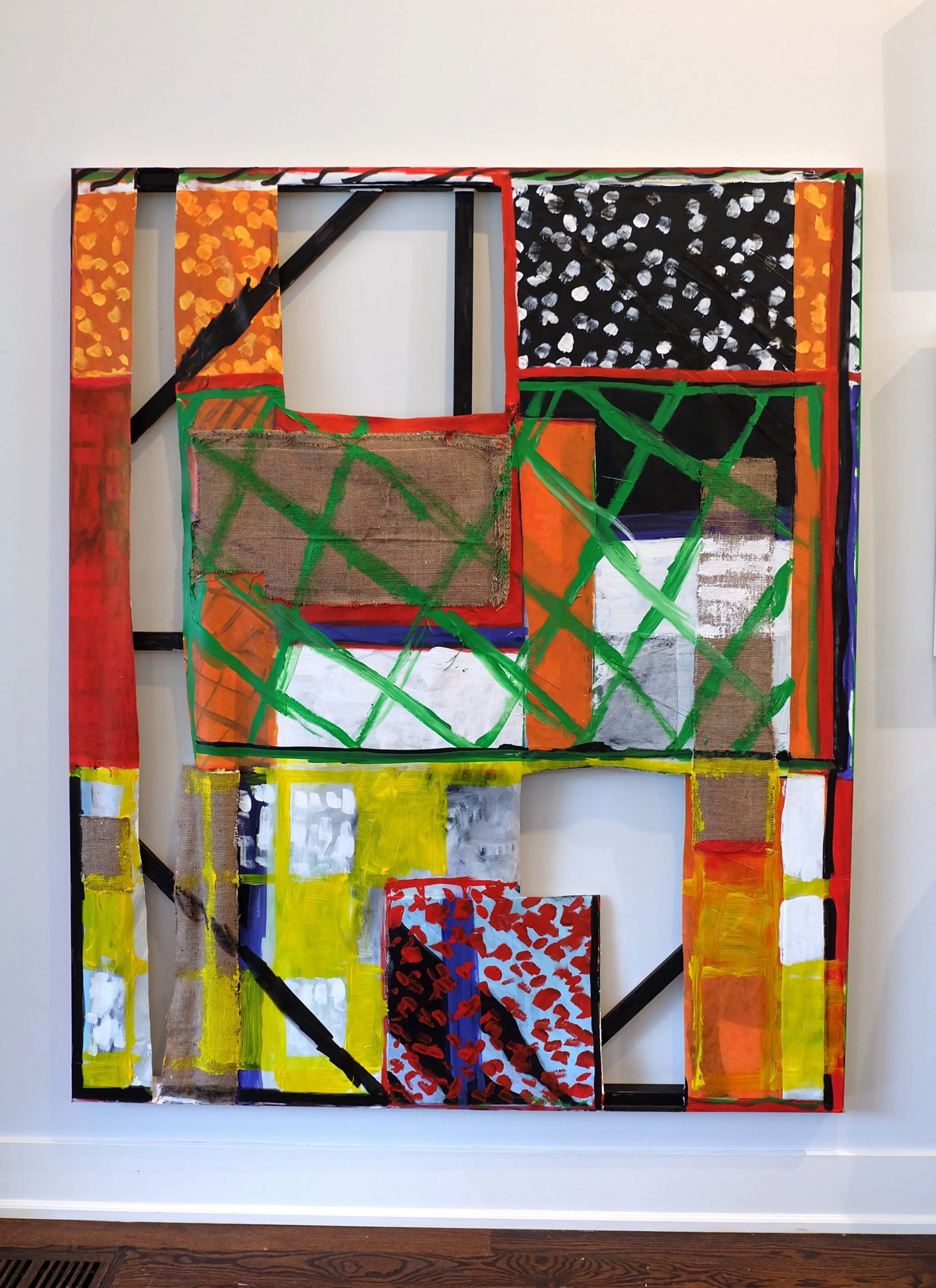 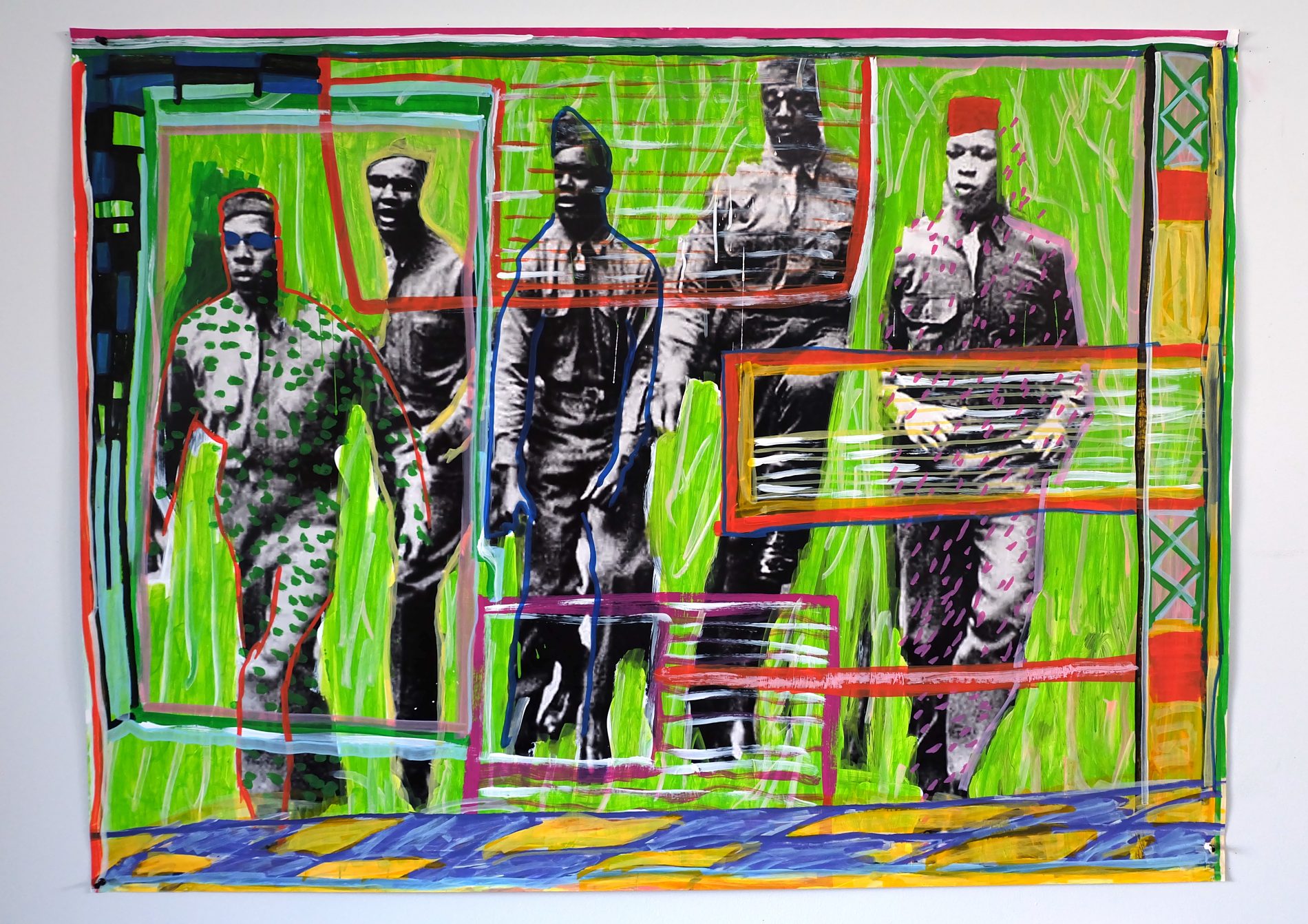 Modou Dieng was born in Saint-Louis, Senegal, a French Colonial settlement built in the 17th century. Until 1960, when sovereignty was returned to Senegal, it was from where France governed its African colonies. During his childhood he received a French Catholic education, while the majority of Senegal was Muslim. This created a foundational bond with France and its culture but also bred a deep alienation from his Senegalese and African identities. The void, birthed from this relational dichotomy, is the womb from which the seed of this exploration grew.

Coinciding with this development, Dieng’s family moved to Dakar, Senegal. Now located in a more urban cosmopolitan city, he was introduced to a burgeoning street culture. Hip hop, graffiti, murals, a robust scene of local artists: all new forms of Blackness. Being in a more international hub, he was quickly introduced to a world of previously unknown Black thinkers; presented with the global political implications of Blackness through the writings of Marcus Garvey, Richard
Wright, Franz Fanon, and James Baldwin. Music filtered in which was previously inaccessible, he discovered the proliferation of reggae, funk and ska coming from London and Bristol. This emergence of Black voices opened up a new vision of the world. Another way point marked, another detail on the blueprint. But what lies deeper? With a growing awareness of where he was positioned in the world, he had to ask, “Who am I to be as an artist?”, “Who am I to be as a
man?”. These questions have no easy solution, but the search for their answers helped to break the bonds and confinements of French assimilation. They provided the springboard of desire to exchange with his African brothers and sisters across the Atlantique and beyond.

From here, Dieng began his formal art education, accepted into the National School of Art in Dakar. Alongside his entry, began the first Dak’Art African Art Biennale through which he was able to attend workshops with Joe Overstreet, Mildred Thompson, Leonardo Drew, Frank Bowling and Mary Lovelace O’Neal. After meeting these artists he gained a deeper love for painting. The vision, aesthetics and energy that were possible within the medium. He was introduced to the pantheon of American abstraction painters. Inspired, he began to personally explore the depth and possibility presented by a canvas, the imaginative lines and multiplicity of layers which can be continuously applied to its surface.

Furthering his formal education, upon the completion of his degree at the National School of Art, Dieng moved to the United States and began working on his MFA at SFAI in San Francisco, California. Moving past the perspective he gained while in Dakar, he began to open up his practice to new mediums. Exploring photography, installation, and performance. Consistently searching for what it means to be Black in our modern society. His paintings became, and have
since remained, a performative act themselves. The topic, emotions and concept dictating the medium. How he could alter one’s imagination, the architecture of a picture, the space, texture, all encompassed by the two dimensionality of the surface.

Another marker on the map was made. Dieng, now working with his own palette and a pastiche of forms, had his shovel. He began to mine the history of an “American Contemporary”
aesthetic. The adit was built to unearth the archives of protest history, Bay Area Latinx culture and performative mural painting. The power of Blackness in Oakland. A space, and a visual voice, was created by inserting his previous inquiries of Africaness and its diaspora into the mainstay of American contemporary art.

Eyeing a new American city to begin building a career in, post the completion of his MFA, Dieng relocated from the Bay Area to Portland, Oregon. Accepting a position at the Pacific Northwest College of Art, which he held for a decade. While located in Portland, he began a deep exploration of the underground subcultures presented by the Pacific Northwest and its histories. Looking back on his experiences at SFAI and his time spent with Okwui Enwezor, he began to curate art. Inspired by Enwezor’s tireless ability to give a voice to the voiceless, he strove to do the same. Wanting to enable conversations between a local and global community he founded a gallery in his studio space which would last for a decade as well.

This is where the work culminates, not in an endpoint of artistic trajectory or the climax of a personal history, but a milepost. We know how far in we’ve gone, but there’s no time given for what’s left. In his current studio practice he has returned to mixed media. Using and appropriating the history of both painting and photography, as two unique contemporary mediums, he is able to layer, sample, mix and play on the theater of his newly found Black diasporic voice.

Modou Dieng now lives in Chicago, Illinois, a city which he sees as a new center for a Black renaissance and excellence, where he continues his focus on curating and his studio practice.