Loving and Coupling: A Conversation with Artist Couples 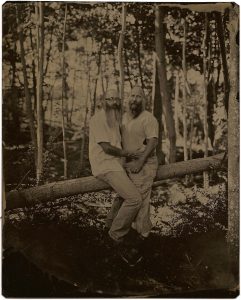 Join us for an evening of light bites, refreshments, and conversation with Chicago-based artist couples in conjunction with our Loving Repeating exhibition! Artists Stan Shellabarger and Dutes Miller, Candace Hunter and Arthur Wright, and J. Kent and Andrew Bearnot, will discuss what it means to live, work and love together. Inspired by the themes of the exhibition, the conversation will touch on feelings of connection, intimacy, loneliness, and loss felt throughout long-term relationships over time.

According to Miller & Shellabarger, “Speaking both to common experiences of intimacy as well as the specifics of queer identities, we attempt to document the rhythms of relationships. The title of the exhibition comes from Gertrude Stein’s novel The Making of the Americans. Stein’s discussion of the way in which life, history, and time is formed and understood is emblematic of our own relationship: Life is made of small, repeated gestures, and each repetition accumulating over time equals history. Our work tries to document the intimacy of these small and repetitive moments in a variety of ways.”

Married artist collaborators Miller & Shellabarger explore physicality, duality, time and romantic ideal in their multidisciplinary work – performance, photography, artists books, sculpture and cut paper silhouettes – that documents the rhythms of human relationships, speaking both to common experiences of intimacy as well as the specifics of queer identities. Their performances, always enacted together in public, push simple materials and actions to almost Sisyphean extremes. Their gestures shift between moments of togetherness and separation, private and public, protection and pain, and visibility and invisibility. Their work is both autobiographical and metaphorical, speaking to common human interaction and queer relationships. Silhouettes of each other, their iconic beards, and their bodies appear regularly in their work. In their signature ongoing performance, Untitled (Pink Tube), a non-theatrical, durational piece, they simultaneously crochet at opposite ends of a long tube of pink acrylic yarn, a metaphorically-loaded object that both unites and separates them. In Untitled (Grave), Miller & Shellabarger dig two holes close together, deep and large enough for each man to lie in. They then dug a small tunnel between the holes that enabled them to hold hands while lying in the graves.

Miller & Shellabarger have had solo shows at the Museum of Contemporary Art Chicago, the Chicago Cultural Center, INOVA in Milwaukee, the University Galleries at Illinois State University and Gallery Diet in Miami and they have performed and/or been exhibited in group shows across the North America. Miller & Shellabarger are a 2008 recipient of an Artadia Chicago award and a 2007 recipient of a Louis Comfort Tiffany Foundation award. Their work in is the collections of the Art Institute of Chicago, the Nerman Museum of Contemporary Art, the Newark Public Library, Indiana University Art Museum and the National Gallery of Canada. Their work has been written about in Artforum.com, Art & Auction, Frieze, Artnet, The Art Newspaper, Flash Art, Chicago Tribune, and the Chicago Sun Times. Dutes Miller and Stan Shellabarger also maintain separate artistic practices. They are represented by Western Exhibitions in Chicagoland live and work in Chicago.

Arthur Wright was born in Chicago and raised in Wilmington, Delaware were he was an Art Major at Wilmington High School. Excelling in the arts during his early years, he secured a full scholarship to the Columbus College of Arts and Design where he majored in Advertising and Graphic Design. After college he relocated to New York where he found a position with the Caroline Jones Advertising Agency and served as Art Director. While at the agency he personally won three prestigious Clio awards. After returning to Chicago in 1993, he has shown works at the National Black Fine Art Show in New York, and in Chicago at the Cook County Assessor’s Office, Nelah Art Expressions Gallery, Gallery Guichard, Nicole Gallery and the Little Black Pearl Gallery.

Arthur has also shown as part of Chicago’s Artist Month in a solo show in 2012, “Oh, The Places We’ll Go!” at a pop-up gallery in Bronzeville, as well as solo and group showings at Faie African Art in Bronzeville Gallery. An April 16th solo show at the Fulton Street Collective featured Arthur’s series: “One In a Million”, an ongoing series of one million pen and ink drawings, studies, paintings and collages of varies subject matter. Arthur was part of the first Fellowship Program at the Stony Island Arts Bank, Chicago. He collaborated with two other artist Kenrick McFarlane and David Anthony Geary; to create three paintings based on the “1975 Paintings by Artist Noah Davis. Arthur’s current series of works “Music On My Mind”, consist of India Ink, pen, paintings and collages that present the story, emotions and movements of Music.

Candace Hunter (chlee), a Chicago based artist, creates collage, paintings, installations and performance art. Plainly, she tells stories. Through the use of appropriated materials from magazines, vintage maps, cloth, various re-used materials, she offers this new landscape of materials back to the viewer with a glimpse of history and admiration of the beautiful. During the beginning of the Coronavirus pandemic, she began to do two things, offer free art classes on Instagram and to create what she now calls her “Brown Limbed Girls” – a growing series of whimsical brown girls enjoying their lives. She is extremely happy to share the girls with a new audiences in New Orleans and Northern California.

A highly respected artist in the Midwest, chlee has most recently received 3Arts Next Level/Spare Room Award, the Tim and Helen Meier Family Foundation Award, the 2016 3 Arts Award and honored by the Diasporal Rhythms Collective. In 2020, she served as a juror for the Kentucky Foundation for Women and was asked to speak at the Midwest Women in Ecology Conference.

Andrew Bearnot (b. 1986, New York) is an artist, educator, and self described materialist. Bearnot received an MFA from the University of Chicago and dual undergraduate degrees from Brown University (BS) and the Rhode Island School of Design (BFA). Bearnot was a Fulbright fellow in Sweden and has been an artist-in-residence at the Museum of Arts and Design (New York, NY), Hyde Park Arts Center (Chicago, IL), Marble House Project (Dorset, VT), and Creative Glass Center of America (Millville, NJ). Recent solo and two-person exhibitions include: Engage Projects (Chicago, IL), MSU Broad Museum (East Lansing, MI), Currents 826 (Santa Fe, NM), The Arts Club of Chicago, The University Club of Chicago, Roots and Culture (Chicago, IL), and The Leather Archives and Museum (Chicago, IL).

2017/2018 – Collaborated on a series of public programs titled Bread and Roses in tandem with Out of Sight festival and Open Engagement.
2019 – Mounted a two-person show titled ᗡOUBLEHEADED at Roots and Culture, which included several collaborative pieces.
2020 – Collaborated on artworks for the show Armatures + Supports at Stanley Brown Jewelist.