Spend the day with us to reflect on the remarkable contributions of Black artists! 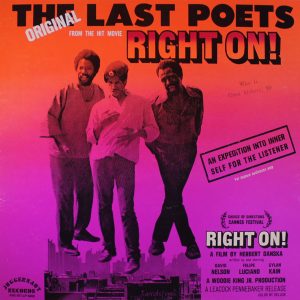 Filmmaker Floyd Webb curates a selection of short films highlighting the Black Arts/Black Power movements, in conjunction with our current exhibition of work by Bill Walker, co-founder of the Wall of Respect. 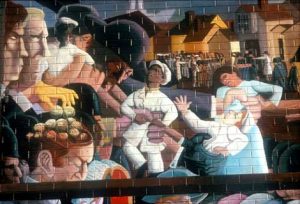 12 p.m. – 1:06 p.m.:
Rare screening of The Making of a Mural by Frank Fuller (15:40 minutes, 1974) documenting the process and technique of Bill Walker making the mural “History of the Packinghouse Worker.” Special thanks to artist and Art Center member, Astrid Fuller for providing the short film. (Image courtesy of Chicago Public Art Group)

2:30 – 3 p.m.
Floyd Webb briefly discusses the films and their importance to the Black Arts Movement. Webb is the founder of the Blacklight Festival of International Black Cinema. His production credits include Daughters of the Dust and American Masters: The World of Nat King Cole, along with numerous documentaries, music videos, and animation projects around the globe. He currently heads up e22 Digital, a multimedia company. He has lectured on African American Cinema History at the School of the Art Institute of Chicago, Blaxploitation films at the Siskel Film Center,  and on Convergence and New Media at the London School of Printing and the Institute of Contemporary Art.

3:10 p.m. – 4:30 p.m.
Right On! The Last Poets (Dir: Herbert Danska, 1970; 80 mins.) features the original Last Poets performing 28 numbers adapted from their legendary Concept-East Poetry appearance at New York’s Paperback Theater in 1969. Opening almost simultaneously with Melvin Van Peebles’s Sweet Sweetback’s Baadasssss Song, Right On! was described by its producer as “the first ‘totally black film,’” making “no concession in language and symbolism to white audiences.” The film has rarely screened over the past 30 years, and this is the premiere run of MoMA’s new restoration, made from the recently recovered 35mm negative. This restoration was undertaken by The Museum of Modern Art with support from the Celeste Bartos Fund for Film Preservation and Paul Newman (San Francisco).

In 1968, on the streets of New York, a trio of young black performers, the Original Last Poets, were creating a hip new form of guerilla poetry woven of soul, jazz, the blues, and gospel. These poets, Gylan Kain, Felipe Luciano and David Nelson, are today being credited as the roots of rap music by many of the leading rappers.