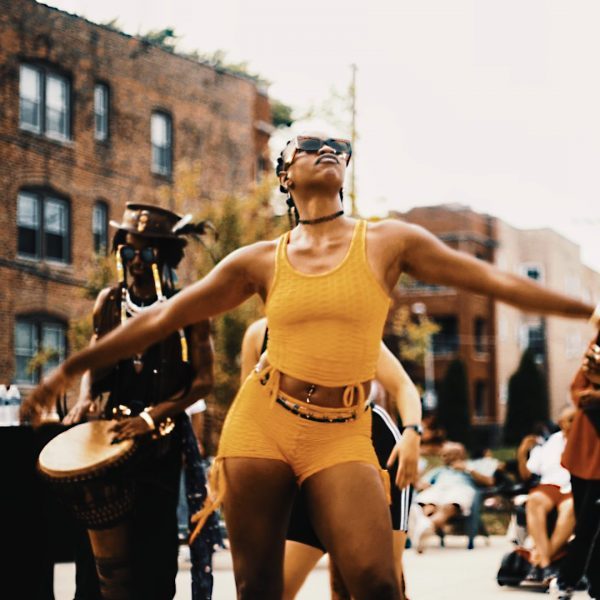 Join us for our August Movies in the Lot with Concerned Black Image Makers (CBIM) for a screening of It’s Different In Chicago by David Weathersby!
It’s Different in Chicago is an intersectional exploration of House music and Hip-Hop culture within Chicago, exploring deep commentary, reflections and experiences significant to Black folks occupation of space, place, and time through dance, music, and community. The documentary, which screened at the Black Harvest Film Festival, chronicles the history of house and hip hop music in Chicago, and how the two styles complemented and competed with each other, leading to revelations and evolution within the city’s Black community. The filmmaker will be present for a pre-screening conversation beginning at 8pm followed by the film at 8:30pm.
—

David Weathersby is a filmmaker/videographer and the founder of City Vanguard, an arts organization that helps independent filmmakers create community-based documentaries for educational and cultural institutions. As a director, he has produced films, documentaries, music videos, and video art projects. His past projects include the documentaries Got the Love, Jazz Occurrence, Thee Debauchery Ball, and The Color of Art. His work has been featured on The Africa Channel, WTTW, and various film festivals including Pan African Film Festival, Sand Diego Black Film Festival, Roxbury International Film Festival, Chicago Onscreen, Chicago South Side Film Festival, Collected Voices Film Festival, Black Harvest Film Festival, Image Union Film Festival, and The Chicago Short Comedy Film Festival. In 2018, he was awarded a Black Excellence award for best director by the African American Arts Alliance of Chicago.

CBIM holds fellowship and organizes with Black lens-based artists to exchange ideas, methods, and concerns that prioritize shared black diasporic perspectives. CBIM supports and collaborated with lens- based artists whose concerns are specific to the diverse spectrums of Black identified experiences, while highlighting alternative visions and critiques of black aesthetics.
—
This screening is in partnership with our Artist Run Chicago Fund.
+ Google Calendar+ Add to iCalendar