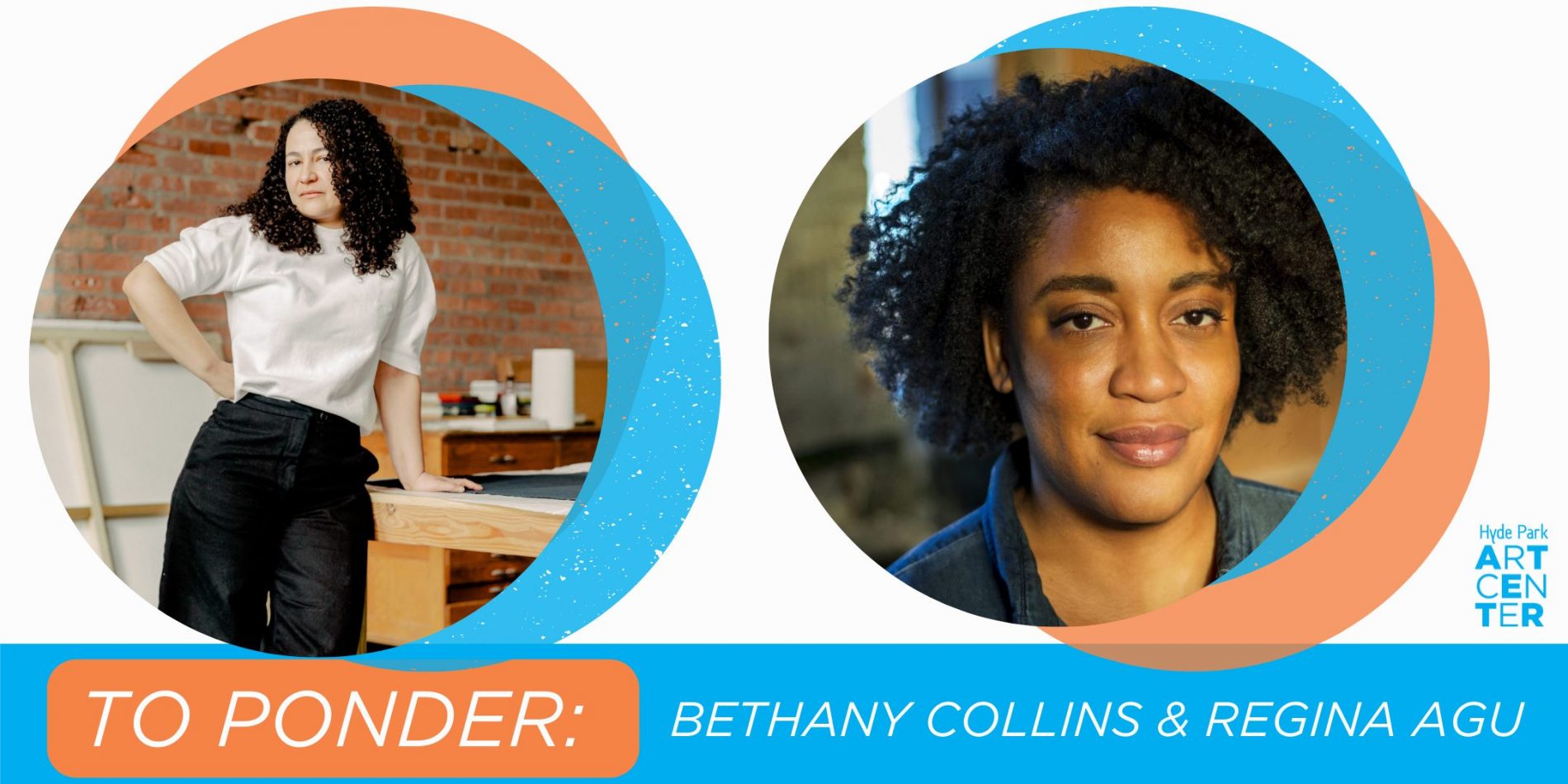 Join us for a new series, To Ponder, an Artist to Artist Conversation series featuring exhibition artists and our Jackman Goldwasser Creative Wing resident artists. To Ponder, named after our program space, colloquially called “the pond,” is also a space for artists to think through something they are currently in practice with or bring a question or theme to the table “to ponder.”

Our first conversation features Language Between Worlds artist, Bethany Collins and Radicle Resident artist, Regina Agu. Both Collins and Agu’s work and practice explore the power of text, distortion and illegibility, and the process of revisiting work over a period of time. The two will discuss the similarities and focal points of their work, centered through a shared text. The conversation will be moderated by our former Residency Director, Megha Ralapati, now Program Director of Fellowships at ArtsLink.

Bethany Collins (American, b.1984) is a multidisciplinary artist whose conceptually driven work is fueled by a critical exploration of how race and language interact. In her Contranyms series, for instance, Collins transposes definitions from Webster’s New World Dictionary of American Language onto American Masters paper, then aggressively obscures much of the entries with an eraser. What remain are specific snippets of meaning that are poetically charged through their isolation, as well as the crumbled paper bits left behind by her erasing. As Holland Cotter noted writing in The New York Times,“language itself, viewed as intrinsically racialized, is Bethany Collins’s primary material.”

Regina Agu was born in Houston, TX. She relocated to Chicago at the beginning of 2020, where she now lives and works. Her work has been included in exhibitions, public readings, publications, and performances internationally. She has exhibited most recently in the 2021 Atlanta Biennial: Of Care and Destruction, and the 2021 Texas Biennial: A New Landscape, A Possible Horizon. Her first solo museum show, Passage, was presented at the New Orleans Museum of Art (2019-2020). Her work has been supported by an Artadia Houston award, grants from Houston Arts Alliance, The Idea Fund, and the Kathrine G. McGovern College of the Arts + Project Row Houses fellowship at the University of Houston for her research project A Psychogeography of Emancipation Park. She has attended residencies at the Joan Mitchell Center in New Orleans through a partnership with For Freedoms, A Studio in the Woods, Open Sessions at The Drawing Center in NYC, Atlantic Center for the Arts, Lawndale Artist Studio Program, among others. From 2014-2017, Agu was the co-director of Alabama Song, a collaboratively-run art space in Third Ward, Houston, which received a 2016 SEED grant from The Robert Rauschenberg Foundation. Agu is the founder of the Houston-based WOC Reading Group, and her other collaborative projects include Friends of Angela Davis Park and the Houston-based independent small press paratext. Agu holds an MFA from the School of the Art Institute of Chicago.

Megha specializes in artist mobility and has collaborated with community-centered organizations based in the US and internationally including Project Row Houses (Houston), ARTPORT Tel Aviv, and Center for Contemporary Art Lagos. She developed and oversaw the Jackman Goldwasser Residency at Hyde Park Art Center in Chicago, where she forged partnerships with the MacArthur Foundation, French Embassy, Asian Cultural Council, Northwestern University, CEC ArtsLink and other institutions to design intentional cross-cultural artistic exchanges. Over her career, she has produced dynamic arts programming that centers the transformative relationship between artists, their ideas, and multigenerational audiences. Before joining Hyde Park Art Center in 2011, she was Director of Bose Pacia in New York, an international visual art gallery presenting contemporary work from across South Asia.

Megha regularly participates in award and fellowship juries, presents workshops to artists of all levels, including at the School of the Art Institute, NYU, and most recently at Asiko, an experimental pan-African summer intensive for artists. She has contributed to publications for Documenta 14, Brooklyn Museum, Sharjah Art Foundation, among others. Megha received an MA in Visual Culture from Goldsmiths and a BA in Art History and Anthropology from Columbia University. She is a board member of Artist Communities Alliance and Enrich Chicago.