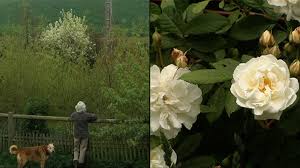 Join French writer and activist Peggy Pierrot for a screening of Va Toto by Pierre Creton, as part of her “Transatlantic melancholia” film curation practice for EXPO Chicago. This film about belonging, gay rural life, physical labor & elderly bodies all inform and illuminate Pierrot’s own practice that intersects journalism, publishing, and radio programs as necessary tools to make audible the voices of societies silenced groups and individuals.

Her research currently focuses on exhuming the histories from the black Atlantic and inviting local populations to participate actively in her research. Pierrot is hosted by the Hyde Park Art Center as part of the Méthod Room in Chicago,  a program of the Cultural Services of the French Embassy and curated by Guillaume Désanges to foster French-American collaborations through cultural and civic engagement on the South Side of Chicago.

More about the film:

“I fell in love with the work of Pierre Creton and it took me by surprise. His movies. His writings. The way he is portraiting men, work, aging, the life in rural France. I love his tenacity, his independence, his modesty, his perseverance, his love of the earth (soil), his relations to non human being, his love of the body of men. I like his sense of belonging because I recognize myself in it, even if according to stereotypes there is not much that could connect this former farm worker and me. But like Pierre Creton i hate travelling, i have the nostalgia of where i grew up and it’s still painfull to have had to move from there. Because I am also strongly from somewhere even if lot of french and european people deny my belonging. The Gesellschaft is suposed to free us from the social control of the Gemeinschaft, and it does in a way. But it also leave us empty. In cities, i still look after communities. And mine i find it in my Brussels neighborood common decency. So we have a lot in common, i think, Pierre Creton and me.” – Peggy PIERROT

The plot : The arrival of Toto, a young wild boar, at Madeleine’s home, Vincent’s altercations with monkeys during his trip to India, and Joseph’s dreams caused by his artificial breathing machine—three stories that Pierre shares with us, which, in different ways, evoke our relationship with animals, our fellow beings.