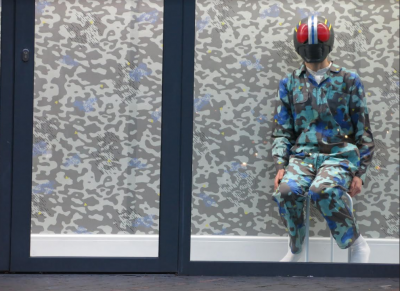 Nadim Abbas explores the role that memory-images play in the intersection between mind and matter. This has culminated in the construction of complex set pieces, where objects exist in an ambiguous relationship with their own image, and bodies succumb to the seduction of space. Join us on October 24 from 6-7:30pm where he will be joined in dialogue with colleague Adrian Wong, Sculpture Professor at the School of the Art Institute of Chicago. Together they will unpack the overlaps and dissonance between working in Hong Kong and Chicago, Abbas’ new projects, and his time in Residence.

Abbas’ work first developed out of a fascination with optical phenomena, mirroring and the creation of immersive theatrical scenarios.  These often touched on the issue of location and how that might structure a dialogue with the notion of something being real yet an image but also a simulacrum of the real.  Wary of a purely “retinal” or illusion-based reading of his work, he would allow elements of inconsistency to show through, in a bid to let the intricate mechanisms of construction unfold before the viewer.

These preoccupations with the phenomenological complexities of visual experience have in recent years evolved into a wider exploration of the technologies of perception.  Referencing a diverse range of subjects, from bunker archaeology to otaku subcultures, Abbas instills generic forms with unfamiliar associations, in an attempt to describe the “invisible violences” that permeate seemingly innocuous facets of everyday life.

Born and raised in Hong Kong and having studied in Toronto, I pursued my interests in the discipline from Los Angeles to Boston. Between academia and practice, I have developed an interest in formally heterogeneous and spatially diverse projects through graphic arrangements and calibrated configurations. In particular, an aesthetic sensibility for nuanced compositional form-finding, and a meticulous visual depiction of ideas. In broader terms, I believe architecture has the capability to breakthrough status quos present in other disciplines through collaboration. Often while engaging the possibilities and limitations outside the sole field of architecture, one is able to discover ways to advance the interpretation of an idea, development of a project, or trajectory of a discipline. I have recently been a project designer at P-A-T-T-E-R-N-S, and assistant teacher at SCI-Arc and UCLA. In 2017, I graduated from the Southern California Institute of Architecture (SCI-Arc). My thesis, selected for the undergraduate thesis prize, was an adaptive reuse proposal that used abstracted contextual objects to reinvigorate an old paper factory near Bologna, Italy. I went on exchange in 2016 at Die Angewandte Kunst in Vienna, where my work was exhibited as part of the SANAA pavilion at the Venice Architecture Biennale. Prior to that, I helped establish Underscore Journal in 2015—a student-run publication at SCI-Arc where we produced bi-annual publications and symposiums, with aim to establish a sense of autonomy and criticality within the student body.