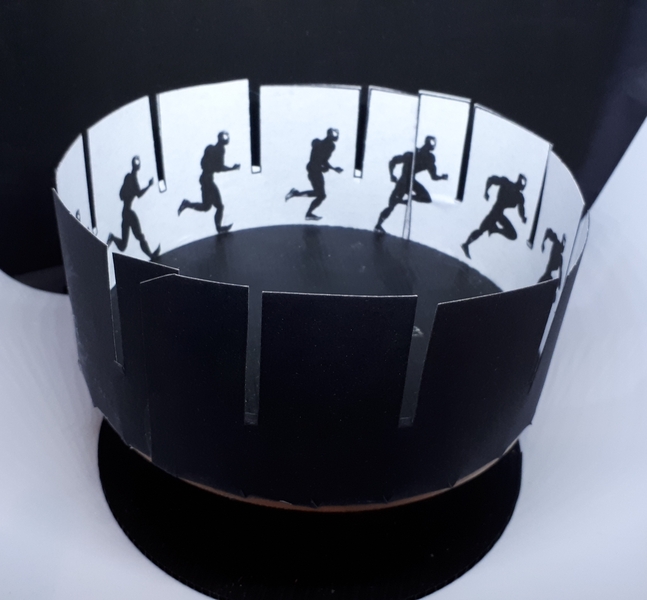 Join guest curator, Scott Wolinak, for an in-person tour of the Wheel of Life exhibition followed by a discussion with exhibition artists, Leslie Baum and Georgina Valverde, on their artistic practice, and translating and creating work to be used as a moving image for a zoetrope. Wolniak will discuss curating the exhibition, and working with artists to explore new media in the context of the exhibition.

Scott Wolniak (b. 1971) is a multidisciplinary artist, teacher and occasional curator based in Chicago. His work in drawing, painting, sculpture and video utilizes labor-intensive techniques and humble materials, along with humor and optical effects, to explore the ever-evolving relationship between landscape and abstraction, outer space and inner space. Wolniak has exhibited extensively throughout the US. His work has been written about in publications including ArtForum, Art in America and the Chicago Tribune, and is part of numerous permanent collections, such as the Museum of Contemporary Art, Chicago, the Art Institute of Chicago, and the Lynden Sculpture Garden, Milwaukee. He is represented by Goldfinch Gallery, Chicago.

Curation has played a lo-key but significant role in Wolniak’s practice over the past two decades. He ran Suitable Gallery, an influential alternative space in his Humboldt Park garage between 1999 and 2005, as well as the tangential video platform, Suitable Video, which curated screening programs and DVD editions between 2005 and 2011. Wolniak received a BFA from the School of the Art Institute of Chicago in 1995 and MFA from the University of Illinois at Chicago in 2002. He is an Instructional Professor in the Department of Visual Arts at the University of Chicago.

Leslie Baum is a Chicago-based painter whose work is invitational in nature. Her painting practice is informed by over twenty years as a museum educator at the Art Institute of Chicago. Baum received her BA from the University of Vermont and studied abroad at the Glasgow School of Art. She has exhibited nationally and internationally with exhibitions in New York, San Francisco, Portland, Mexico City, Rome, and South Korea. Her drawings and paintings are in permanent collections of the Chicago Art institute and the Elmhurst Art Museum. Her work has been reviewed extensively, including in Artforum, Art in America, Hyperallergic, and the Chicago Tribune. She has received residencies at Yaddo and the Vermont Studio Center. A 2020 DCASE grant funded the pleinairarchive.com – a site documenting her ongoing painting social practice.

Georgina Valverde is an interdisciplinary artist and educator whose work encompasses sculpture, performance, writing, and critical pedagogy. She holds an MFA from the University of Illinois at Chicago and a BFA in Painting and Printmaking and BA in Modern Languages from James Madison University, Virginia.  Georgina began her career as a printmaker and shifted to sculpture and fiber art in the mid 90s. Since 2012, her work has focused on curatorial and participatory forms that engage the public to collaborate with artists of diverse disciplines. Recent performances and exhibitions include Documents Bureau at the 2nd Floor Rear Festival, the Bughouse Square Debates at the Newberry Library, the Dill Pickle Club Reenactment with Pocket Guide to Hell at the MCA’s Word Weekend, and Telling Belongings, a community conversation organized by the National Museum of Public Housing.