Conrad Freiburg: It Is What It Isn’t

Hyde Park Art Center > Exhibitions > Conrad Freiburg: It Is What It Isn’t

What does Nothing look like? Conrad Freiburg attempts to show us in his upcoming project at the Hyde Park Art Center, It Is What It Isn’t. Through this exhibition and Residency at the HPAC from October 2010-July 2011, Freiburg considered the possibilities of the Void through an interactive sculptural installation in the Art Center’s main gallery that included a large-scale drawing machine, a hand-crafted telescope, musical instruments, and a “destruction station.”

The artist invites the public to experience the so-called Void by literally creating and destroying things in the installation, as well as seeing and hearing them. This project is rooted in Freiburg’s contemplation of the idea that the most powerful force in the physical world, as well as the psychological, emotional, aesthetic and spiritual worlds is that which is not known or not understood, i.e., The Void.

This idea surfaces in many disciplines and can be looked at through multiple angles. In astronomy the void is represented in the vast emptiness of outer space. Religious beliefs, such as Buddhism, experience the void as a mental space for absolute consciousness. Psychologists liken the void to the relationship one has to the Other. The concept of the void is always defined through it’s opposite condition – the Something and Nothing define each other. In the artists words, “It Is What It Isn’t explores the impossible VOID, the sublime unknown, the space into which we expand, the concrete absence we honor through song, carved stone memorials, night-time gazing at the vast emptiness of our heavenly rotunda, and the hand we can no longer hold.” Breaking down the notion of the void into the categories of absence, loss and the unknown, Freiburg welcomes the audience to think of the world not in material objects, but the opposite: having nothing and knowing nothing.

The exhibition included three large-scale sculptures conceived and produced by the artist to address various aspects of the void. In the center of the 2,400 square foot gallery stood the 12-foot tall harmonograph, or drawing machine, that created visual representations of musical chords (see example to the right). This sculpture is an impressive machine with two pendulums that swing in different directions and control the lateral movement of a pen and of a drawing surface respectively. Changing the pendulum height changes the harmonic interval, creating a unique geometric pattern that corresponds to a musical interval. This machine was “played” and created drawings throughout the exhibition.

The second part of the installation transformed the Art Center’s Jackman Goldwasser Catwalk Gallery into a viewing deck. Freiburg created a hand-crafted telescope for the public to view a constellation of drawings made in succession by the harmonograph and placed 20 feet up on the two-story gallery walls.

The third sculpture in the installation Freiburg calls the Self Contained Unit of Entropy (SCUE). The SCUE machine is a sculpture designed for participants to create, document, and destroy other sculptures. Freiburg led workshops at the Art Center in which people made sculptures that they then destroyed with the SCUE. A photographic archive of destruction (above) is also available the artist’s website.

From October 2010 until June 2011 Conrad Freiburg was also an artist-in-residence in Studio 6 on the second floor at the Hyde Park Art Center. During this time, he fabricated work for It Is What It Isn’t and created an audio archive he calls the Pod of Absence. To create the archive, Freiburg invited musical interpretations of the Void by artists Jason Ajemian, Mississippi Gabe Carter, the Thin Man, Harold Mann, Andy Hall, and others. This process culminated in a public album release at the Art Center in May 2011. Freiburg also invited the public to drop in the studio and talk to him about his ideas over the course of his ten-month residency.

Originally from rural downstate Illinois, Conrad Freiburg asserts that Nothing is in his bones. As a result, he is able to focus his artwork on the moment of constant discovery open to many different disciplines such as music, philosophy, astronomy, and engineering. His sculptures, drawings and installations often include the viewer to be physically interactive to complete the artistic experiment inherent to the work. Demolition and reconstruction are at the forefront of Freiburg’s investigations. His work has mostly been exhibited throughout Chicago since 1998. He received a BFA from the School of the Art Institute. He currently lives and works in Chicago, busks all over the country, and is represented by Linda Warren Gallery. 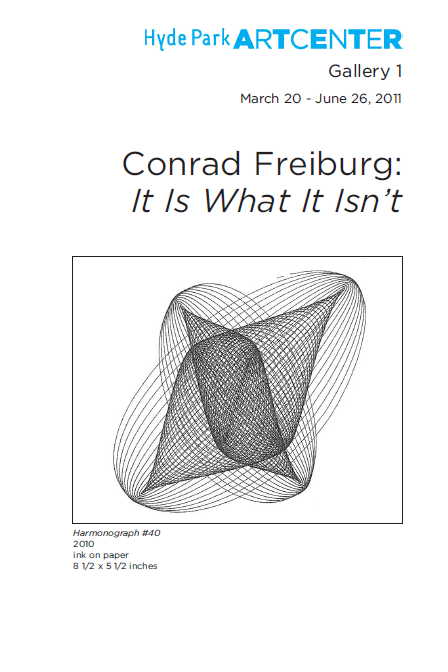