Working from a concept developed by Miriam G. Canter Middle School students in collaboration with Chicago-based artist Mary Tepper, Exquisite Rivers elaborates on the theme of waterways as it appears across the school’s curriculum. In response, students created more than sixty individual linoleum block prints over the course of the 2006-07 academic year. Their images depict the rivers that emerged in their explorations of science, literature, history, and other subjects. As part of the Visual Learners and Leaders program, Tepper led students in designing and carving their own linoleum printing plates. Individual prints show students’ skill and personality. In the tradition of the “exquisite corpse” game, famously invented by the Surrealist artists, these were combined within each classroom to create the collaboratively produced banners. The river that runs through each piece connects and flows into the next in the series. This creates an unpredictable and often fantastic landscape for the single continuous waterway.

Canter Middle School is a Chicago Public School located in the Hyde Park/Kenwood community. The Art Center has been working with Canter’s administration, faculty and students for the last several years, culminating in Cityscape, a mural suite exhibited at the Cook County Administration Building during the summer of 2006 and soon to be permanently installed at Canter. Mary Tepper is a book and paper artist who has led numerous Art Center classes and outreach programs, including working with Canter for the last three years. The works on view in Exquisite Rivers was created by the students of Ms. Askevich, Ms. Collins, Mr. Fishbine, Mr. Ryan, and Ms. Washington. A special thanks is due to Mary Tepper and Dr. Carolyn Epps.

This project was supported by Friends of Canter and the Lloyd Fry Foundation. 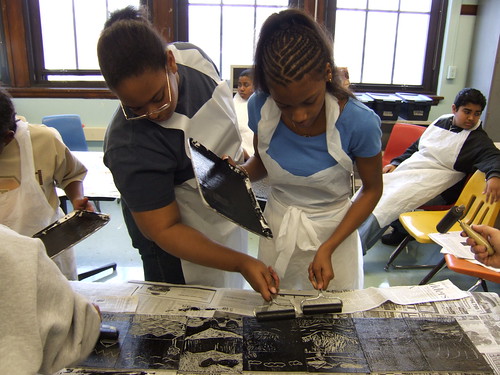