Home of the Free

Home of the Free, an exhibition assembled by independent curator, Jens Hoffmann, examined what freedom meant for individuals that are living in the United States on a daily basis. According to Hoffman, “The exhibition seeks to distance itself from the purportedly communal and historic understanding of the term and to address anew what a lived experience of “freedom” might entail. The aim was to form a collective portrait of how individual freedom is understood and experienced… specifically within the Chicago community.”

Following ideas of such influential art projects and exhibitions as The Museum of Neighborhood Phenomena by Jack Backer (Seattle, 1979) or People’s Choice by Group Material (New York,1981) Home of the Free primarily featured submissions of ephemera and objects in response to the curator’s open call to the public to bring in personal objects and art works to the Art Center. These contributions were displayed on blue tables that occupied the entire main gallery painted red. Items were donated, lent or deposited throughout the run of the show in effort to form a collective portrait of how individual freedom is understood and experienced on an everyday basis in this country. The public was also invited to to come and tell stories that represented or relate to personal thoughts of freedom rather than freedom understood as a collective vision in the Hyde Park corner (soapbox) to draw connections to the activist history of London’s own Hyde Park (United Kingdom).

As a radical gesture, the gallery did not feature any artwork by the acclaimed artists listed on the promotion. Instead, these artists contributions were ephemeral and were either screened once (Mark Bradford and Joseph Grigely, Catherine Sullivan) or presented lectures or talks (Jennifer Allora & Guillermo Calzadia, Laura Letinsky, and Mario Ybarra, Jr.). Some artists listed on the promotion were originally confirmed to participate, but were not able to participate in the end due to schedule conflicts (Carol Bove, Wade Guyton, and Martha Rosler).

Home of the Free was presented in part with support from the Andy Warhol Foundation for the Visual Arts and anonymous donors. 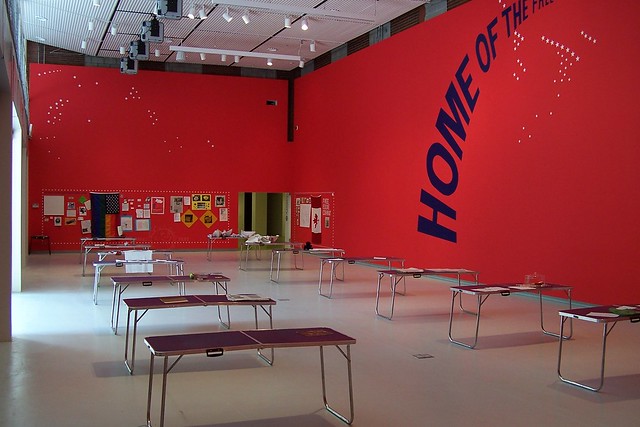 Special Appearances and/or Contributions by:

*Ybarra participated in a short residency at Hyde Park Art Center and worked with youth to develop a mini project.

Tuesday, August 28th, 6:00pm
Free: By, For and About Home: a dialogue on the design and the materials that make up the domestic space led by Photographer, Laura Letinsky