Equestrian war monuments get a modern makeover from emerging artist Jeremiah Hulsebos-Spofford in a grand new site-specific installation, Hall of Khan, on view from April 14 until July 28, 2013 in Gallery 1 at Hyde Park Art Center. Live horses in the gallery will replace bronze sculptures and abstracted forms will take the place of historical riders whose lives and legends have shaped history through the present day. Having long been a celebratory symbol of territorial conquest and cultural domination throughout history and nations, the artist calls both the form and purpose of the monument into question in this exhibition.

Genghis Khan, Robert Oppenheimer, and Joan of Arc are some of the heroes and villains evoked to interrogate the typical construct of monument: that of the larger than life horse rider in bronze, usually set high on a plinth. The interactive exhibition will present symbolic constructions of historical place, cultural space, and living equestrian sculpture, including an architectural construction entitled “Hall.” Modeled after a graffiti-covered structure in the English Gardens in Palermo, Sicily, which is itself a replica of the Crystal Palace built in Hyde Park, England to house the Great Exhibition of 1851, “Hall” will conjure up the space of exhibition halls for World’s Fairs throughout the ages, and the excitement they generated around cultural advancement and scientific progress. Of particular interest is the connection between Hyde Park, England and Hyde Park, Chicago as sites for these fairs.

Hall of Khan is generously supported in part by: The Harpo Foundation, a Community Arts Assistant Program grant from the City of Chicago Department of Cultural Affairs and Special Events, an Artist Project Grant from the Illinois Arts Council, a state agency, and with special assistance from Palos Hills Riding Stables/New Traditions Riding Academy. 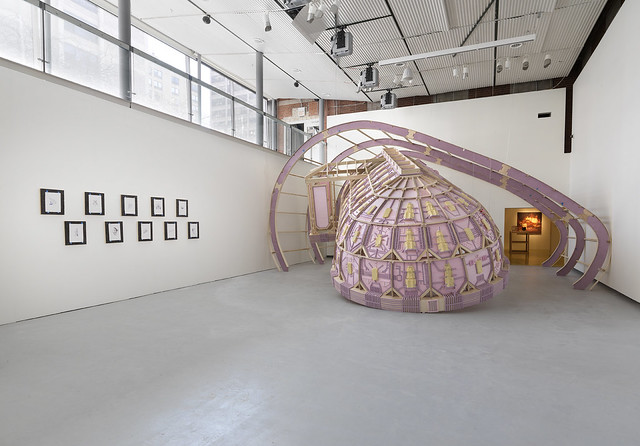 There was a Naked Guy on a Horse at the Hyde Park Art Center, Chicago Magazine

The Top 21 Exhibits at Chicago’s Museums this June, Chicago Magazine 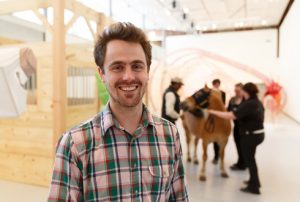 Jeremiah Hulsebos-Spofford (b. 1983, Vermont) approaches his practice as a conduit into many worlds, intervening in spheres of activism, art discourse, education, science fiction fandom, and equine technology. Recently he attended Skowhegan School of Painting and Sculpture, and received an MFA from the University of Illinois at Chicago and a BFA from Bard College in New York. He is a Fulbright grantee and the recipient of numerous awards, including an Illinois Arts Council Project Grant, a CAAP grant, and a grant from the Propeller Fund. He was recognized by NewCity as one of Chicago’s Breakout Artists to watch in 2012.  He teaches Sculpture at DePaul University and the Chicago High School for the Arts. The Chicago-based artist is currently an artist-in-residence in the Jackman Class at the Hyde Park Art Center from September 2012 through June 2013.