* Please note the gallery will be occupied for the Teacher’s Institute on Wednesday, August 10 from 9 am until 4 pm.

The exhibition Loving Repeating presents new work by longtime partners and artist collaborators Dutes Miller and Stan Shellabarger addressing intimacy, proximity, and queerness.  Silhouettes of the artists in playful and suggestive poses fill the gallery with alternate patterns made from paper, paint, projection and shadow. The immersive multimedia installation premieres their largest work to date, which was made in response to the presence and absence of human touch experienced during the COVID-19 pandemic.

Since 1993, the two Chicago-based artists have been creating works on paper, performances, and installations that draw attention to the human condition experienced through the queer perspective. Their artworks focus on the underlying concept of the infinite feeling of connection, loneliness and loss felt throughout long-term relationships over time. Loving Repeating includes three major works created in consideration for the Art Center’s gallery space: a twenty-foot tall by an eighty-foot wide hand-painted mural of the artists’ bodies in black and grey contour, a multi-channel video projection made in collaboration with artist Steve Reinke, and several strands of large cut-outs of their figures in black paper that create garland. Together, the works create a grey scale kaleidoscopic experience of bodies in dynamic orientations that bend and transform our understanding of relationships through space and time.

In addition to the immersive installation, the exhibition includes a table on the Jackman Goldwasser Catwalk Gallery for the public to make origami cranes and contribute them to the installation. Cranes are a symbol of love and hope.  As art imitates the cycle of life, the end of the exhibition will be celebrated with a bonfire to burn the paper cranes and garland artwork and tranform them into their final artform. The ashes will be placed and sealed in a pine box and added to the artists’ series of work titled burnt. The preceeding two works in the burnt series are also on view in the exhibition.

According to Miller & Shellabarger, “Speaking both to common experiences of intimacy as well as the specifics of queer identities, we attempt to document the rhythms of relationships. The title of the exhibition comes from Gertrude Stein’s novel The Making of the Americans. Stein’s discussion of the way in which life, history, and time is formed and understood is emblematic of our own relationship: Life is made of small, repeated gestures, and each repetition accumulating over time equals history. Our work tries to document the intimacy of these small and repetitive moments in a variety of ways.” 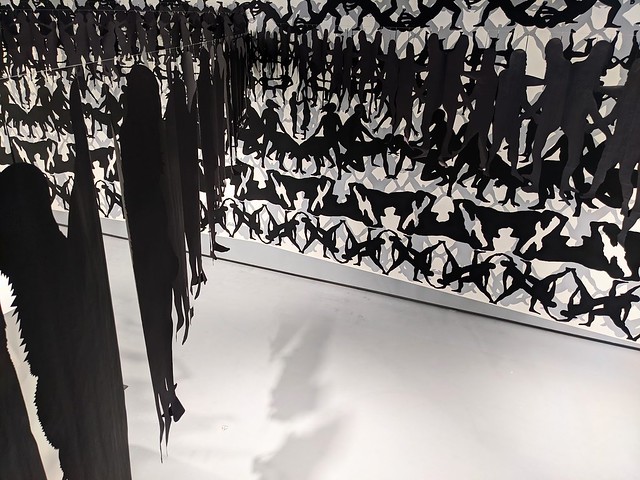 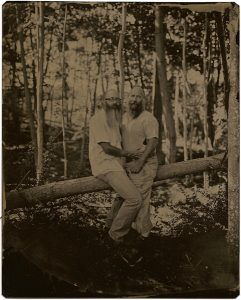 Married artist collaborators Miller & Shellabarger explore physicality, duality, time and romantic ideal in their multidisciplinary work – performance, photography, artists books, sculpture and cut paper silhouettes – that documents the rhythms of human relationships, speaking both to common experiences of intimacy as well as the specifics of queer identities. Their performances, always enacted together in public, push simple materials and actions to almost Sisyphean extremes. Their gestures shift between moments of togetherness and separation, private and public, protection and pain, and visibility and invisibility. Their work is both autobiographical and metaphorical, speaking to common human interaction and queer relationships. Silhouettes of each other, their iconic beards, and their bodies appear regularly in their work. In their signature ongoing performance, Untitled (Pink Tube), a non-theatrical, durational piece, they simultaneously crochet at opposite ends of a long tube of pink acrylic yarn, a metaphorically-loaded object that both unites and separates them. In Untitled (Grave), Miller & Shellabarger dig two holes close together, deep and large enough for each man to lie in. They then dug a small tunnel between the holes that enabled them to hold hands while lying in the graves.

Miller & Shellabarger have had solo shows at the Museum of Contemporary Art Chicago, the Chicago Cultural Center, INOVA in Milwaukee, the University Galleries at Illinois State University and Gallery Diet in Miami and they have performed and/or been exhibited in group shows across the North America. Miller & Shellabarger are a 2008 recipient of an Artadia Chicago award and a 2007 recipient of a Louis Comfort Tiffany Foundation award. Their work in is the collections of the Art Institute of Chicago, the Nerman Museum of Contemporary Art, the Newark Public Library, Indiana University Art Museum and the National Gallery of Canada. Their work has been written about in Artforum.com, Art & Auction, Frieze, Artnet, The Art Newspaper, Flash Art, Chicago Tribune, and the Chicago Sun Times. Dutes Miller and Stan Shellabarger also maintain separate artistic practices. They are represented by Western Exhibitions in Chicagoland live and work in Chicago.