What are the true surfaces of an object? Chicago-based artist Marian Carow considers this philosophical perspective and other formal concerns in her upcoming solo exhibition. Salvages will present new sculptural work rendered in cardboard, through which Carow explores minimal forms referencing architecture as well as the constant flux and impermanence of our built urban environment. Carow is an alumna of Hyde Park Art Center’s Center Program (2016) and has been making drawings and sculptures for several decades. 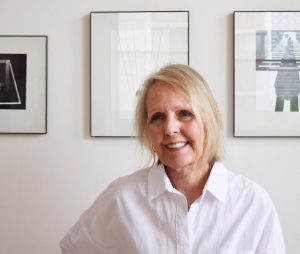 Marian Carow is a Chicago-based artist whose practice in the last several decades has adopted the language of minimalism to develop bodies of works on paper and, more recently, sculpture.  In a process -based practice, she works intuitively toward development of idiosyncratic imagery and objects which reference architectural influences, addressing linear and spatial relationships.  Her sculptures start with often discarded common materials such as salvaged corrugated cardboard or wood scraps, and incorporate considerations of reuse and ephemerality.  She attributes these themes in part to being a witness to the rhythm and dynamics of urban change in the city around her as well as to adaptation to unexpected life events.

A native of the Texas Panhandle, she has spent most of her life in the Chicago area.  She holds a BFA from the Art Institute of Chicago and has been the recipient of a City of Chicago Department of Cultural Affairs Individual Artist’s Grant and a residency at Ragdale.  Her work has been included in numerous regional juried shows, including Harper College Small Works,  the Rockford Art Museum and Evanston Art Center biennials,  and has been exhibited at Hyde Park Art Center, Adds Donna Gallery and Mu Gallery.