The exhibition Material Poems premiers the artworks by Argentinean artist Máximo González, produced during a summer residency at the Hyde Park Art Center. During this time, González produced nearly 20 sculptures, paintings, installations, and digital works incorporating found or borrowed objects from Chicago. The work shown from November 7th until March 5th are excerpts from the Material Poems series and features five artworks that concentrate on the relationship between contemporary art and the common decorative art displayed in American households. Most noted for his work with devalued currency, González’s project at Hyde Park Art Center demonstrated a new process for the artist. He wrote poems and verses that generated the ideas for the sculptures and installations prior to making the work at the Art Center. The works address various topics rooted in the artist’s childhood memories (circa 1970’s) of his family while also incorporating larger international political and economic problems of Argentina’s Dirty War era. Chicago’s many flea markets and garage sales provided much of the readymade material González used to construct the artworks. 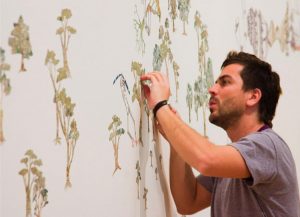 About the artist: Originally from Argentina, where he studied at the Institute of Art Josefina Conte in Corrientes, Máximo González moved to Mexico City in 2003. He has completed 25 solo exhibitions and special projects amongst which are the following: Project for the reutilization of obsolete vehicles after the extinction of petrol at Travesía Cuatro, Madrid and Project B, Milano; Dream in DFMC office, Chicago; Wait at Haydee Rovirosa Gallery, NY; Chignahuapan at Skestos Gabriele Gallery, Chicago IL and Voges und Partner, Frankfurt; PISAR at Ruth Benzacar, Buenos Aires, Argentina; Moral and Civic instruction at Travesía Cuatro, Madrid; Greenhouse effect at Art&Idea, Mexico City. He has participated in 58 group exhibitions in Argentina, Brazil, Paraguay, Uruguay, Mexico, Puerto Rico, Guatemala, United States, Canada, Spain, England, France, Germany, Poland and Czech Republic. Most notably, he showed “Where have all the flowers gone?” as part of the Poetics of the handmade exhibition curated by Alma Ruiz at MOCA Los Angeles and participated in The tree: from the sublime to the social at the Vancouver Art Gallery, Canada; Fine Line at Museum de Las Americas (Denver, CO, EUA); Hand Lines at MUAC University Museum of Contemporary Art (Mexico City) and the 2nd Polygraphic Triennial of San Juan, Latina America and the Caribbean (Puerto Rico). The artist was in residence at the Hyde Park Art Center from July 12 until September 2, 2010. 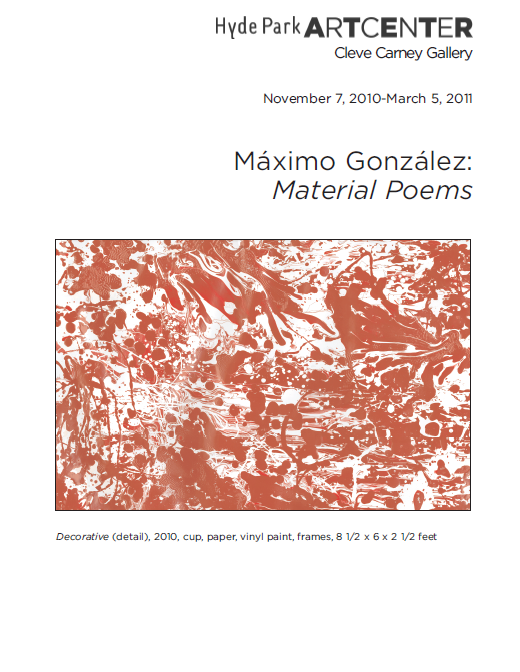