Charles Heppner and Diane Jaderberg have both studied extensively at the Art Center where they have cultivated a unique artistic style in their respective media. Nature’s Matrix brings together the work of these two artists to highlight the ways in which they sample formal structures from nature and invent new patterns that reflect technology’s influence on how we perceive the environment.

Glitches in a system are opportunities for spontaneous creation of new systems. The geometric repetition in both Jaderberg’s and Heppner’s work is reminiscent of glitches (or visual stutters) in natural order, allowing the artists to abstract nature out of real forms and suggest other worlds. Diane Jaderberg begins her sculptures with a solid piece of porcelain or stoneware, which she molds, pushes, and extracts parts into twisting, feathery objects that depict fluid energy and movement. These objects are hybrid structures that conflate land, sea, and sky in an uncanny and timeless fashion. “I enjoy bringing the clay to life in a form that appears recognizable, but in actuality does not exist,” said Jaderberg. For Charles Heppner, the tree presents the ultimate well-ordered system, as well as a meditative icon. Using a single image of the sky through the trees, he mirrors and repeats the image in digital tiles to create an intricate circuitry of branches and blooms. Heppner explains, “I have always been attracted to the structure of the tree. I have an emotional connection to them, thinking of them as altruistic givers. But, I also think of them as system. I think of the tree branches and limbs as the visual mappings of a space-filling curve shaped to maximize the tree’s ability to engage in photosynthesis.” He calls this series of photographs “prayer rugs” for their tapestry-like appearance and reference to nature’s awe-inspiring ability. 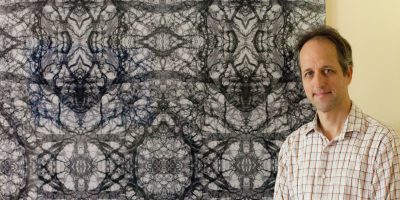 Charles Heppner is a multidisciplinary artist living in Brooklyn and Chicago. His current body of work concerns spirituality and the human relationship to nature. He has a degree in Mathematics from the University of Wisconsin–Madison and has studied photography, drawing, and painting since 2003 at Hyde Park Art Center, where he completed the Center Program, an intensive course dedicated to building critical dialogue for professional artists seeking to advance their work. His work is in many private and corporate collections throughout the United States, and he has exhibited his work in galleries in Chicago and New York City.

Diane Jaderberg has been making vessels and sculptures in clay under the instruction of teaching artist Hardy Schlick at Hyde Park Art Center for nearly 10 years. Jaderberg is an avid sailor and horticulturist, and her stylized forms reflect her knowledge of aquatic and botanical elements. The native Chicagoan’s work is in many private collections across the city. This is the first public exhibition of her work. 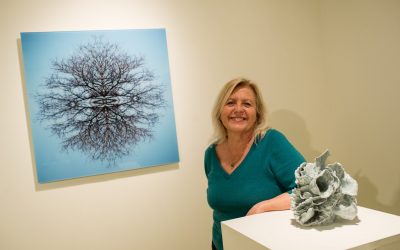 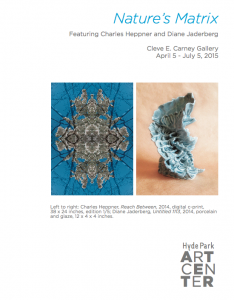