Regarding the Missing Objects

Guest curated by the art historian and critic, Ruslana Lichtzier, the exhibition Regarding the Missing Objects presents artworks by eight contemporary artists that draw attention to the schism between artistic knowledge production and institutional power while spotlighting the hidden force of censorship in forming both aspects. The featured artists respond to a Jewish institutional collection and archive to which they have gained selective access to, inviting us to question how accessible are museums and archives? The artists include William J. O’Brien, Dana Carter, Tirtza Even, Ben Segal, Julia Klein, Maggie Taft, Jaclyn Mednicov, and Elana Adler. 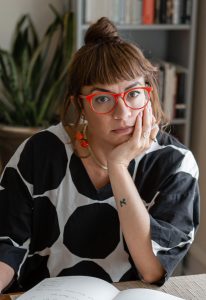 Ruslana Lichtzier (she/her) is a doctoral student in Art History, a Mellon Fellow in MENA (Middle East and North Africa) and in Critical Theory at Northwestern, as well as a curator, educator, and critic. Born in Russia, raised in Israel, and residing today in the US, Lichtzier’s practice originates from the non-place of migration, a condition that bestows an ethical commitment to states of statelessness. Broadly, Lichtzier focuses on the optic regimes of domination which yield various performances of the non-citizenship in the Middle East. Her work is animated by the scholarship of Michel Foucault, the Frankfurt School, Feminist New Materialisms, and Black Studies. Recent curatorial projects include the group exhibitions An Echo, She Is (Chicago Manual Style, Chicago, IL), Four Flags Chicago (Chicago Manual  Style, Chicago, IL (in collaboration with Stephanie Cristello)), The Dangerous Professors (Flatland Gallery,  Houston, TX (with the support of the Museum of Fine Arts, Houston)). Lichtzier has contributed to  numerous exhibition catalogues and international art publications; her essays have appeared in English,  Hebrew, Spanish, and Korean. Lichtzier is a Lecturer in the Art History, Theory, and Criticism Department at the School of the Art Institute of Chicago.