Curated by John Corbett and Annie Morse, the retrospective of Robert Amft‘s glorious, uproarious paintings, was on exhibition at the Hyde Park Art Center from March 6 to April 16, 2005. The show exposed seven decades of fiercely independent Chicago art. Amft was so far ahead of his time that some of his oldest canvases look like they were painted yesterday. Amft has been making images in the Windy City since the 1930s, when he was a student of Francis Chapin at the School of the Art Institute.

Born in 1916, Amft is an artist with a deft sense of humor and a highly personal visual language. His unique oeuvre represents a missing link in Chicago art history, bridging the pre-WWII artists and subsequent generations of Chicago Imagists. Amft came up during the waning years of modernist art in the city, amid regionalists, social realists, post impressionists and early abstractionists, but as a young artist he was already busy pursuing ideas that set him apart from other ’40s and ’50s painters. Aspects of Amft’s work – particularly his deadpan humor and interest in self-taught art – vividly presage the aesthetic of the Hairy Who and other post-60s Chicago artists. Amft’s early paintings were inspired by encounters with the work of self-taught artists and were often set within a complicated commentary on art history, resulting in playfully revamped versions of paintings by Picasso, Seurat and Van Gogh.

Since the late ’50s, Amft has often painted serially, creating groups of landscapes, forestscapes, and scenes of his backyard in Rogers Park, manipulating a tightly delineated range of materials. In the ’60s, when other artists began to investigate outsider art and ironic humor, something he’d been into for decades, Amft delved deeper into such terrain, creating classic pieces like Head, his portrait of Mona Lisa with a cigarette in her lips, which won the Art Institute’s Renaissance Prize in 1974. Many of Amft’s ’60s and ’70s paintings were made using airbrush and stencils, a practice he continues today in magnificently conceived, brilliantly stylized scenes of the Midwestern landscape. 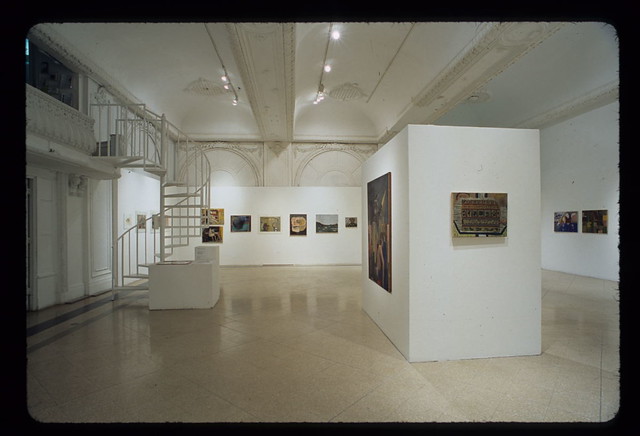