Ruby Satellite was inspired by the bizarre real-life case of Russell Eugene Weston Jr., who stormed the U.S. Capital in search of the Ruby Satellite, which he believed was capable of destroying the ‘Black Heva’–a disease spread by alien cannibals. Although clearly deranged, Weston was convinced in the supreme authority of the imaginary Ruby Satellite and was willing to do anything to reach it. The exhibition Ruby Satellite explores the complex drives and magnetism of authority, its many guises, and its ability to assert control–overt or veiled, subtle or overwhelming–with particular emphasis on the obsessive and often perverse behavior linked to such power structures and belief systems. The exhibition brings together a powerful collection of works that include photography, video, and installation. 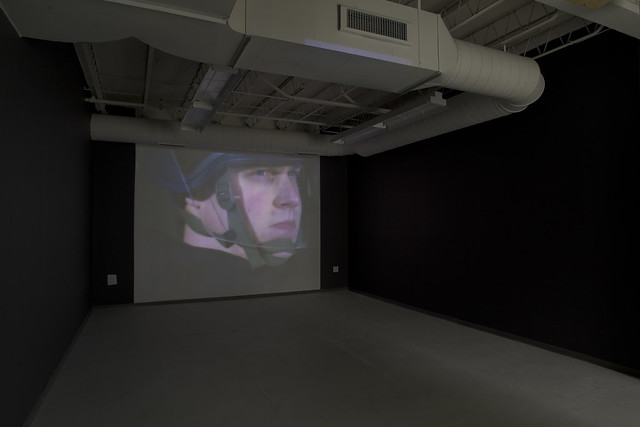 Ruby Satellite explores the complex drives and magnetism of authority, its many guises, and its ability to assert control The relationship between power, submission, fetish and obsession are explored by Swedish artist Annika Larson in Poliise (2001), a floor-to-ceiling projection presented in a custom built interrogation room. Three policemen dressed in riot gear play suggestively with their accoutrements–gloves, batons, handcuff, and masks–while standing over a fourth man in plain clothes. Through cropping, slow camera movement, and detailed close-ups, Larson stages violent psycho-sexual dramas.

Christine Tarkowski continues the power/domination theme in Exposed Stud, Nuclear Sub, (1998), in a large photo-collage, the repeated pattern of two-by-fours used in drywall construction in feminine pinkish hue, shrouds the overtly phallic half submerged ballistic nuclear submarine. In Yoshua Okon’s large-scale projection Oreillese a la Orilla (Money Will Make the Dog Dance) (1999-2000), corruption and the perversion are suggested in portraits of police and security guards in Mexico City. Bribed by Okon to dance for the camera, they reveal themselves in different ways, some joke or engage in lewd macho posturing, while others run off with the money.

In a quieter work Nicoline van Harskamp explores the symbolic power of the uniform in a large wall paper work with repeated patterns of private and public security uniforms worn in London, Amsterdam, and Berlin presenting alternative portraits of cites. Several artists explore the authority vested in texts and doctrines such as Chinese artist Wei Guanquing who questions the didacticism of his native country in the Extended Virtuous Words (Red Wall series) (1998-1999). Consisting of twelve silk-screen prints the work references popular children’s books from the Ming Dynasty that were designed as moral and ethical instruction manuals. In Lennon, Sontag, Beuys (2004), German artist Kota Ezawa takes archival footage from the three iconic cultural superstars looping extracts from seminal lectures and interviews filmed during the 1970s. Transforming the footage into simplified cartoon animations, Ezawa diminishes their star status and warns against hero worship.

In Now Let us Now Praise American Leftists (2004), Paul Chan employs FACES™–the software program developed by the FBI to generate criminal stereotypes for wanted posters–to create his own visual database of left-wing activists including anarchists, Black Panthers, and Yiddish activists to reveal similar type-casting by leftist groups. The powerful influence of extreme ideologies is explored by Magnum photographer Thomas Dworzak in a series of extraordinary portraits of Taliban members taken in downtown Kandahar, Afghanistan, in 2002. ‘Pierre et Gilles,’ style–eyeliner, powered cheeks, and absurdly kitsch backgrounds–the portraits were retouched to present a more flattering image of the revolutionary and sold to Dworzak.

Equally bizarre is Adam McEwen appropriation and re-staging of the infamous photograph of the public execution of Italian dictator Benito Mussolini and his mistress Clara Petacci in a village square near Milan. The desire that many of us have at some time or another to defeat faceless corporations is cleverly dealt with by Janice Kerbel in Bank Job (1999), comprising exhaustive plans of how to rob a fortified bank in the City of London, one of the WORLD’S most surveilled centers of capital. Posing as an architecture student Kerbel monitored the bank for eighteen months. The resulting work takes the form of surveillance photographs, detailed maps, and a get-a-way plan.

The powerful photographic and video installations in Ruby Satellite explore some of the different meanings and forms that authority can assume. Bittersweet recollection, wrenching confessional, and frightening realization are just a few of the strategies employed by the diverse group of artists assembled for this exhibition.Ruby Satellite considers our fascination with, and thrall, to the commanding and redemptive seduction of authority.

Ruby Satellite curator Ciara Ennis is the Curator of Exhibitions at the California Museum of Photography at the University of California, Riverside.

The exhibition will travel to UCR/California Museum of Photography, where it will be on view from October 22 to January 5, 2007.