Focusing on a city that is constantly in flux—having been built from scratch, rebuilt, and overbuilt—the exhibition reveals a generation’s dramatic achievements while questioning the sustainability of existing urbanism. Using the notion of China at its height as a beginning metaphor, the exhibition works to explore Shanghai’s aspirations and desire to regain its once legendary reputation, the reflected need of China to be recognized as international and modern, and the power struggle between Shanghai’s local and global identity. Organizers of Shanghype! worked closely with selected artists on specific projects “pushing the place of Shanghai in the imaginary.”

All artists involved with the exhibition have spent significant time in China conducting conceptual and visual research on cultural authenticity. The works were selected by Davide Quadrio, a Shanghai-based curator and founder of BizArt, one of China’s oldest and most renowned independent spaces for contemporary art. Co-curating the exhibition is Dan S. Wang, a widely published Chicago-based writer and artist.

Shanghype! is held in conjunction with the exhibition Reversed Images: Representations of Shanghai and Its Contemporary Material Culture at the Museum of Contemporary Photography at Columbia College Chicago. Both exhibitions explore the cityscape of Shanghai as conceptual terrain. This program is part of a college-wide initiative at Columbia called Eyes on China. This exhibition and related programming has been supported in part by The Center for The Arts of East Asia at the University of Chicago, Arthub, Dr. Samuel Wang, and anonymous donors. 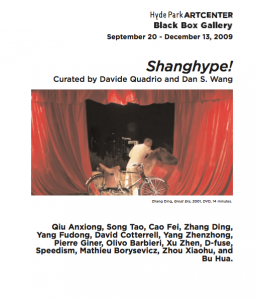