Spatial City: An Architecture of Idealism

Spatial City brings together an international, multi-generational array of artists–with an emphasis on artists living in France–whose work contends with idealism, utopian thinking, and, in counterpoint, the cynicism that follows failed revolution and the retreat of optimism in the face of pragmatic reality. The exhibition traces the connection between the vanguard concepts of urban space dominant in the mid-twentieth century and championed by Yona Friedman to the art of the present, bringing together historical and recent examples of artists from the US and abroad. Originating curator Nicholas Frank (Institute of Visual Arts, Milwaukee) worked with participating curators Allison Peters Quinn (HPAC) and Luis Croquer (the Museum of Contemporary Art Detroit) to develop the exhibition and tour. The exhibition Spatial City is inspired by the theoretical architecture of the same name by Yona Friedman (b.1923). 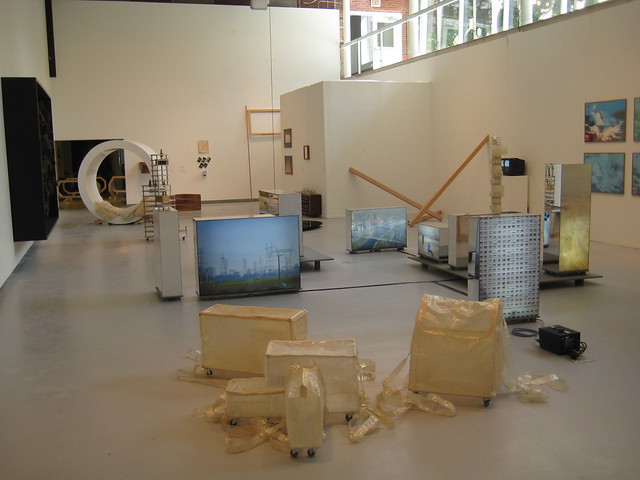 In his first manifesto Mobile Architecture (1958), Friedman defined the structures in this ideal city as being transformable, transportable and occupying as little ground area as possible, pushing the structures to hover over the earth rather than occupy the surface directly. Friedman’s ideas, disseminated in the aftermath of World War II, have influenced subsequent generations both indirectly and directly. While Friedman’s concepts informed the framework of the show, the selection of artwork reflects the cycling and recycling of optimism and cynicism in postwar and contemporary culture. Artists in the exhibition are responding to society’s complex problems: the failed utopian social experiments that resulted in the dehumanizing conditions of Brutalist architecture, the rise and fall of totalitarian states, the tensions resulting from post-colonial immigration, and the destruction of the environment in the name of progress.

Each exhibition venue will amend the artist list according to their space. The Hyde Park Art Center is pleased to add the work of Chicago-based artists Sara Schnadt and Hui Min Tsen, and Detroit-based artist Ben Hall. The exhibition will also include a program of video art on view in the Black Box Gallery on the second floor. The Hyde Park Art Center will host Paris-based photographer Philippe Durand in residence from June 22 until July 12, 2010. The residency is made possible through the support of the Cultural Services of the French Embassy in the United States. The artist is represented by Galerie Laurent Godin, Paris. This is the first exhibition of the Frac collections in the United States, and it will tour the Midwest throughout 2010. Curator Nicholas Frank (Institute of Visual Arts, the Peck School of the Arts at the University of Wisconsin-Milwaukee) originated the concept and exhibition.

The project and tour were developed in partnership with Platform (Regroupement des Fonds rágionaux d’art contemporain–the association of the Frac) and the Cultural Services of the French Embassy in the United States.

The project Spatial City: An Architecture of Idealism was developed with assistance from Platform (Regroupement des Fonds rágionaux d’art contemporain, France) and benefits from the support of Culturesfrance-French Ministry of Foreign and European Affairs, the French Ministry of Culture and Communication (Délégation aux Arts Plastiques) as well as from the Cultural Services of French Embassy in the USA.

February 5 – April 18, 2010: Institute of Visual Arts in the Peck School of the Arts at the University of Wisconsin-Milwaukee 2155 N. Prospect Avenue Milwaukee, WI 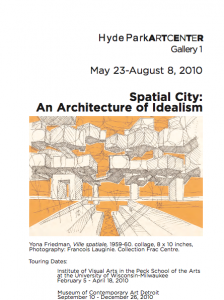