Fantasy architecture, collage and the urban experience merged in Speaker Project, a multi-directional, multi-layer sound sculpture by Juan Angel Chavez. Comprised of found material seen every day on city streets, such as old billboard signs and orange traffic cones, this large-scale speaker sculpture turned the gallery space into a laboratory for art and sound. Audience members were encouraged to play with the artwork and experience how this interactive installation incited our senses visual, tactile and aural – and enhanced our perception of the built environment.

The exhibition was partially supported by the Richard H. Driehaus Foundation, a special assistance grant from the Illinois Arts Council, a state agency, and struggle inc. 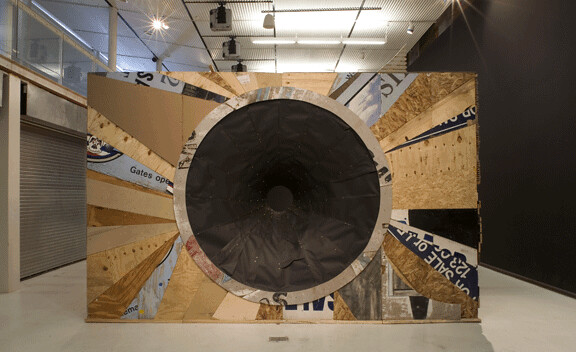 When art and music intersect, more often than not the end result is a series of concert screen prints or just unsatisfying visual weirdness (Drawing Restraint 9, anyone?). Artist Juan Angel Chávez’s latest installation at the Hyde Park Art Center not only weds art and music, but inserts the music directly into the sculpture. As in Chavez’s previous works, his Speaker Project uses found objects, but this time the material is elevated to a grand scale. Chávez has built a 25×10-foot speaker box large enough to house performing bands, which have been co-curated by the Empty Bottle. The resulting audio laboratory encourages visitors to experiment with sound and challenges not only the way music is heard, but how it’s experienced. (QH) 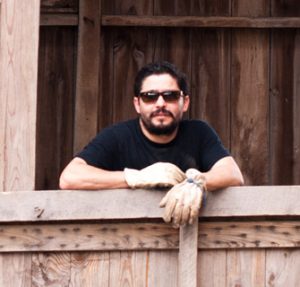 Juan Angel Chavez attributes his sensibility of found objects to his upbringing in La Junta, Mexico, a town close to the border just south of Texas, where no object or packaging goes to waste because resourcefulness is as plentiful as refuse. Immigrating in 1985 to the city of Chicago, where he currently lives and works, Chavez encountered an abundance of urban materials, not only objects but also cultures, such as skateboarding and mixing records as a DJ. He has collaborated on numerous public art sculptures and murals around the city. Sculptures, collages, and installations by Chavez have been exhibited in Chicago at the Museum of Contemporary Art and the Mexican Fine Arts Center Museum. His artwork has also been shown in Copenhagen and Berlin, and many other national locations including Space 1026, Philadelphia and Rhys Gallery, Boston. Having studied at the School of the Art Institute in Chicago and receiving first-hand pointers from his father, a skilled carpenter, Chavez is able to create his own hybrid language used to examine and activate the relationship between art, music, and the public. Chavez is a recipient of the Louis Comfort Tiffany award, the Artadia Award, the 3Arts Artist Award, and the Richard H. Driehaus Individual Artist Award. 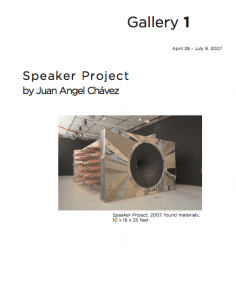 In addition to the brochure produced in-house, an exhibition catalogue containing and interview with the artist and photography by Michelle Litvin was created and is available for purchase by contacting exhibitions@hydeparkart.org. The catalogue was made possible by support from Gregory Cooper, The Richard H. Driehaus Foundation, Ruth P. Horwich, Deone Jackman and Eugene Goldwasser, the Joyce Foundation, and Sandra and Michael Perlow.