When we think we have everything figured out, life often brings us to an unexpected fork in the road. Such feelings are very difficult to express with words alone; the artists in the exhibition have elected abstract visual expression as the best medium of representation for these complex and uniquely human realities. The artworks included in Spellbound illuminate the fragile balance between order and disorder, clarity and murkiness, within the human mind and the breadth of human experience. Spellbound, curated by Sandra Perlow and Linda Kramer, places special emphasis on artistic technique. Each of the four artists selected for the exhibition employ very unique materials and methods in their artistic practices. The artwork in the show is rooted in structure, pattern, repetitive abstract forms and marks that seem to create a spell. 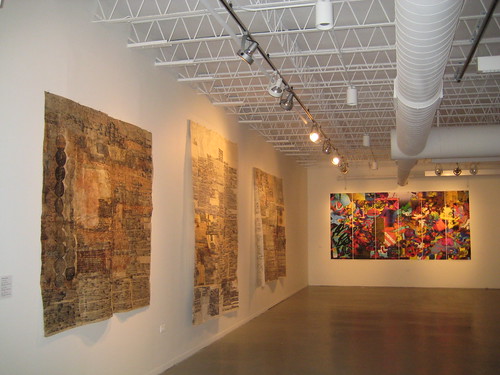 Lora Fosberg’s works take a whimsical, almost tongue-in-cheek approach to confronting human realities of day-to-day life such as emotions, anxieties, and our interactions with the natural world. As Sandra Perlow puts it, “(Fosberg) thinks about the beauty and tragedy of the world we live in, what Henry Miller called ‘the air conditioned nightmare.'” The gouache painting WHEREVER YOU GO, THERE YOU ARE bombards the viewer with a seemingly insurmountable mountain that upon further inspection is actually a grouping of highly ordered banal objects, resulting in a provocation to be aware of — and also accept the rampant materiality of — modern life. RULES FOR SURVIVAL offers the viewer a satiric yet useful set of advice. Fosberg’s eight rules painted over found papers that are stained and filled with numeric figures and math problems are gleaned from hard-learned life lessons and difficulties. p(callout). The artworks included in Spellbound illuminate the fragile balance between order and disorder, clarity and murkiness, within the human mind and the breadth of human experience.

John Miller has been a painter for 60 years and applies his deep understanding of color, line, and form to archival prints composed on the computer through photoshop and scanning images. He has built an ouevre based on images taken from his daily life assembled into layered compositions. The artist believes he is influenced by everything, stating “Your head is a camera.” His piece Chicago New York Conniption at first glance seems a chaotic digitized landscape. Further inspection reveals a very comforting and familiar naivetÃ© embodied in images of characters from children’s television programs and familiar hangtags from Beanie Babies stuffed animals.

Yvette Kaiser Smith’s multi crocheted fiberglass forms are soaked in polyester resin, sculpted, then attached to one another to create large wall hangings. Kaiser Smith explains, “Identity Sequence Pascal’s Triangle Red is based on digits from the first six rows of Pascal’s Triangle. Blocks of the same color represent each digit. Two triangles, one inverted, touch at their beginning digit, locking the two halves together. The individual units, which look like little tunnels, are joined end to end, alluding to organic strands while retaining their strong sense of architecture. Also, focusing on how the material process parallels identity construction, I crocheted all the units in this group to be the same. Each single unit used the same stitch and the same number of stitches to produce a mass of individuals who began exactly the same but by enduring the steps within this material process, the cookie cutter units took baby steps towards individuation.” Through the combination of hand-crocheted knots and an underlying mathematical structure, a balance is achieved between the intuitive and the objective. Amidst this balance is a statement about the unique nature of feminine and masculine identity according to Linda Kramer. p(callout). Each of the thoughtful pieces within the show reflect the notion that amidst the disorder of modern life there exists an ordered structure and stability.

Michele Feder-Nadoff places small, subtle accumulated marks on large sheets of Japanese paper. Using sumi-e ink, persimmon juice and occasionally gouache and etching, she fills the large semi-transparent paper from bottom right to upper left in the same way that Hebrew is written. The final image is composed of these accumulated gestures and marks, echoing the hammering marks of coppersmithing work that she practiced in Mexico. Mark after mark becomes an elegant mass. Feder-Nadoff remarks, “The final image is composed of these accumulated gestures, echoing the hammering marks of my coppersmithing, their noise and rhythm, water, landscape, and textural script.” The exhibition Spellbound aims to challenge viewers to look deeply into the abstract forms and find refuge from chaos. Beneath the surface of these highly varied artworks exists a common thread; each of the thoughtful pieces within the show reflect the notion that amidst the disorder of modern life there exists an ordered structure and stability. In the end, Spellbound leaves the viewer decidedly at a sober, grounded realism that lies at the intersection of optimism and pessimism. 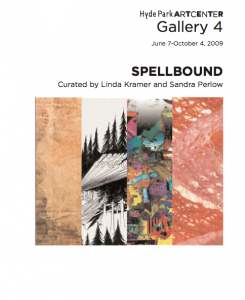