Environmental racism and its disproportionate impact on communities of color, in rural and urban environments, is the subject of this sub-chapter of Toward Common Cause: Art, Social Change and the MacArthur Fellows at 40. The impacts of environmental racism, exacerbated by infrastructural inequalities including limited access to healthcare, healthcare workers, food, and clean drinking water are realities shared by disinvested and disenfranchised communities across the globe. These realities are highlighted in the work of three artists: Mel Chin, LaToya Ruby Frazier, and Fazal Sheikh.

This exhibition at Hyde Park Art Center is one of many exhibitions in multiple venues organized by the Smart Museum of Art  at the University of Chicago under the umbrella title, Toward Common Cause.  The expansive  exhibition, which celebrates the 40th anniversary of the MacArthur Fellows Program, will encompass a broad spectrum of contemporary artistic practice, including community-based projects realized in public spaces as well as solo and group presentations in multiple museum, gallery, and community spaces. The full list of participating artists is online at the exhibition website,  Toward Common Cause: Art, Social Change and the MacArthur Fellows at 40.

Toward Common Cause is presented in partnership with the Smart Museum. 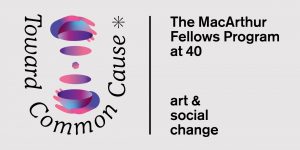 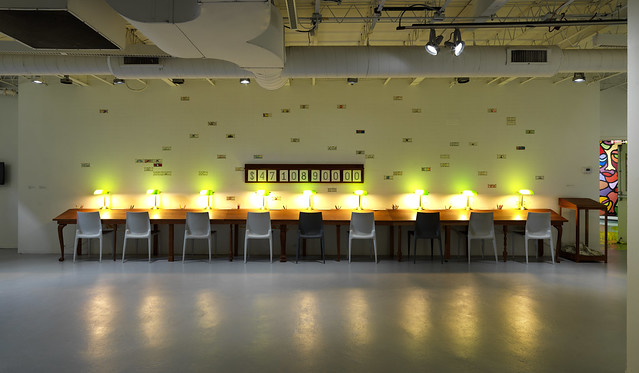 The focus of Mel Chin’s Chicago Fundred Initiative: A Bill for IL is the latest iteration of his decade-long Fundred Project whose focus is lead contamination in water, soil, and housing. Lead exposure is an invisible, environmental health threat to children. The Chicago Fundred Initiative: A Bill for IL invites individuals to create their own “Fundred,” a facsimile of a hundred-dollar bill: a form of creative currency that affirms the right of each maker to equal protection against environmental hazard and demonstrates the value of the lives of children. Please download a fundred template, create your own, and bring it to Hyde Park Art Center to be presented in the exhibition before July 1, 2021.

Latoya Ruby Frazier presents a selection from Flint is Family, a project completed over the course of five months in Flint, Michigan documenting the now infamous Flint water crisis.

Sheikh’s Desert Bloom/Conflict Shoreline. These intertwined works were created in Israel’s Negev Desert where Sheikh documented government efforts to remove the Palestinian Bedouins from the northern threshold of the desert. Unlike other frontiers fought over during the Israel-Palestine conflict, this one is not demarcated by fences and walls but by shifting climatic conditions. The threshold of the desert advances and recedes in response to colonization, cultivation, displacement, urbanization, and, most recently, climate change. In his response to Sheikh’s “Desert Bloom” series (part of Sheikh’s The Erasure Trilogy), Eyal Weizman’s essay incorporates historical aerial photographs, contemporary remote sensing data, state plans, court testimonies, and nineteenth-century travelers’ accounts, exploring the Negev’s threshold as a “shoreline” along which climate change and political conflict are deeply and dangerously entangled. 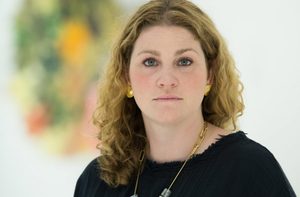 Abigail Winograd is the MacArthur Fellows Program 40th Anniversary Exhibition Curator at the Smart Museum of Art at the University of Chicago. Her scholarly research has focused on the emergence of aberrant abstractions in post-war South America as well as museological approaches to expanding canonical narratives.

Prior to her appointment at the Smart Museum, Winograd organized The Other Transatlantic: Kinetic and Op Art in Eastern Europe and Latin America for the Museum of Modern Art Warsaw (traveled to Garage Museum of Contemporary Art, Moscow, and SESC Piñheros, São Paulo, 2017–2018) and Abstract Experiments: Latin American art on paper after 1950 (2017) for the Art Institute of Chicago. In 2016–2017, she was the Transhistorical Curatorial Fellow at the Frans Hals Museum in Haarlem, the Netherlands. She was the Research Associate for Kerry James Marshall: Mastry (2016) at the Museum of Contemporary Art Chicago, where she also organized Unbound: Contemporary Art after Frida Kahlo (2014) and Zachary Cahill: Snow (2014) as the Marjorie Susman Curatorial Fellow.

Winograd earned a Masters and PhD in art history at the University of Texas at Austin and has and contributed to publications such as Bomb, Mousse Magazine, Frieze, and Artforum.