Children of the Wall Murals

Wall of Now: Children of the Wall is a dynamic mural project inspired by the 50th Anniversary of the Wall of Respect , an iconic mural that presented portraits of African-American heroes on a private building on Chicago’s South Side from 1967-1971. Chicago artists Miguel Aguilar (Kane One), Rahmaan Barnes (Statik), Liz Lazdins (Beloved), and Lavie Raven (Raven) collaborate to design and produce the public artwork highlighting the diverse and influential hip-hop community that runs deep throughout Chicago and the South Side. Additional artists, musicians, poets and creatives also contributed, utilizing a variety of media including spray paint, wheat paste, and photography.

Challenging the standard notion of a mural as a commemorative or celebratory presentation, Wall of Now: Children of the Wall emphasizes the potential of a mural to activate the social and dynamic qualities inherent within art and architecture. Subjects of the mural include local hip-hop heroes Urbanized Music, Brickheadz breakdancers and Kuumba Lynx. The mural is one of three exhibitions at the Art Center held in conjunction with the 2017 Chicago Architecture Biennial, speaking directly to this year’s theme, “Make New History.”

The artists chose the title Children of the Wall to acknowledge the historical impact and importance the Wall of Respect  had on their street art practices as well as recognizing the many artists who utilize art as a platform to push boundaries and challenge convention.  As Lazdin explains, “Who are the everyday heroes? What are the contemporary calls for social justice? This project is our call for solidarity, inspired by the diversity and rich history of the Chicago South Side.”

The mural will continually be added to over the course of the next couple of years in response to artistic development and shifting needs in public platforms for expression in the community. 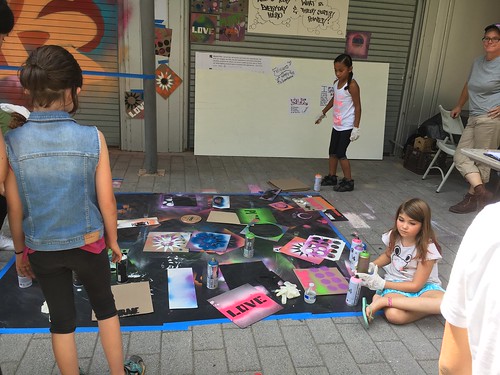 Reflections from the artists:

We draw inspiration from the Wall of Respect; a collective mural created in 1967 by OBAC (Organization of Black American Culture) who were utilizing the project to promote the Black aesthetic in art, uplift the black community and fuel the liberation movement. Through careful planning, using photography, portraiture and poetry OBAC artists placed a multitude of Black Heroes on the walls of a building at 43rd and Langley. Subjects included people like Muhammad Ali, Nat Turner and Gwendolyn Brooks. These trailblazers inspired mural projects across the nation and were also the jumping off point from which we began conceptualizing the Children of the Wall project.

All the Children of the Wall lead artists come from a graffiti background and although our styles differ considerably in some respects, we do represent a certain aesthetic; essentially a certain “school” of muralists. By calling this project “Children of the Wall” we are acknowledging the key role historic projects like the Wall of Respect play in our identity but we are also highlighting the intergenerational component- we are the humble successors who bring our own language and stories to the mix.  Because illegal graffiti played a key role in our artistic development we are also “children of the wall” in the sense that painting walls fascinated us as youths. They were what we climbed on, hide behind and painted our names on in an effort for recognition, excitement and a voice. We feel a strong connection to the brick and crumbing concrete viaducts of the southside and also the people who inhabit it, family, friends, elders, neighbors.

With the help of DJ Lunchbox Law, Ang13 and groups like Kuumba Lynx and IMAN we kicked things off with a community event to essentially “bless the project.” The event included rappers, poets, live graffiti painting, food and community art projects. (Performers also included Stick and Move Youth Crew, University of Hiphop, JNX and Urbanized Music. Graffiti panels were painted live during the event by Bel2, Raven, Dwel and Stef.)

As the Wall of Respect did before us, we used a variety of disciplines to address the concept of heroes. Rather than looking outward into the larger world, we looked on either side of ourselves for the unsung heroes. We asked the community and of ourselves:

Who are the everyday heroes? What are their superpowers?

People as young as 4 yrs old responded through social media and hand-written contributions. Heroes listed included activists, artists, mothers, fathers, grandparents, daughters, sons, all children, teachers, black and brown friends, women, God, the elements, ourselves. They were accredited with powers such as boundless perseverance, resourcefulness, love, vulnerability, forgiveness, empowerment of others. What we discovered through this process is that in order to continue to move forward toward a more just and beloved community, we need to be able to not only recognize the everyday hero next to us, but also find the hero within ourselves and be ready to take on that role when needed.

Through this project we also hope to draw attention to the historical diversity of the Hyde Park community- economic as well as racial.  We hope Hyde Parkers old and new, can look past economic and cultural differences and make sincere efforts to get to know neighbors to the south, west and north. The wellbeing and health of families in Woodlawn and Englewood (for example) are tied undeniably to theirs.

We would like to thank all the elders who schooled us on the struggle and enriched our lives. Also, special thanks to the Allison Peters Quinn and everyone at the Hyde Park Art Center for trusting us with it’s walls and facilitating the many challenging aspects of this project. Thanks to our families for their patience and support in our creative endeavors. Thanks to all the artists and performers who contributed their time and contributions. Special thanks to Michelle Nordmeyer from the Hyde Park Art Center for always being available to help with logistics, drill bits and extension cords. Another special thanks to Stephanie D’Hubert for her invaluable technological assistance in the creation of the renditions and large-scale stencils. 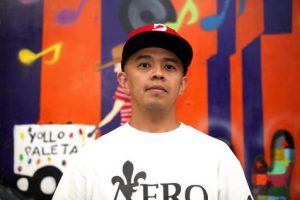 Artist, educator, and researcher Miguel Aguilar has been painting graffiti in Chicago since 1989. He founded Graffiti Institute in 2012, and in 2013 curated “Outside In: The Mexican-American Street Art Movement in Chicago” at the National Museum of Mexican Art. Miguel earned a Bachelors Degree in Fine Arts (2000) and a Masters of Art in Teaching (2011) from The School of the Art Institute of Chicago (SAIC) and is a 2012 recipient of the 3Arts Teaching Artist award. He was a 2016 participant in Hyde Park Art Center’s Center Program. He currently teaches History of Graffiti through the Art History department at SAIC and is a practicing visual artist and muralist.

Liz Lazdins began her work as a graffiti writer and rapper in the 1980s and 90s. She was a founding member of the Vision Village- one of the earliest Hiphop community centers in Chicago- and also a member of the city-wide organization Chi-ROCK (Chapter 3 Allstars). Her underground hiphop roots can be seen in almost everything she creates: large scale colorful murals, pieces and illustrative works. Currently a mother, poet and activist for human rights, she preferences stencil to create her messages and images on sidewalks in effort to “remind people there is always more going on than what is seen on the surface.” Recently Lazdins contributed to the Graffiti Garden mural project along the Bloomington 606 trail and showed at NIU’s Jack Olsen Gallery alongside Mario “Zore” Gonzalez Jr. and Ruben Aguirre in the exhibition. She exhibited her work in the exhibition Creatures from the Concrete at Hyde Park Art Center in 2015. 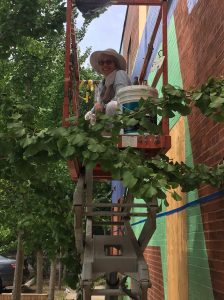 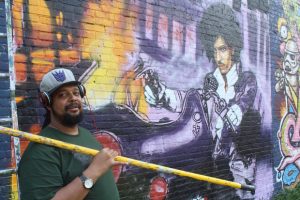 Rahmaan Barnes creates public murals that fuse graffiti aesthetics with the classical training he received at the American Academy of Art. He is the co-founder of R.K. Design, a graphic arts and mural collective for which he has produced over 400 murals, including mural commissions from corporations such as Coco Cola, Toyota, The Village of Rosemont, and Red Bull. He has produced illustrations, brand identity, and print projects for Frank 151 magazine, Argus Brewery, and the Chicago Jazz Fair. Through the Chicago Public Art Group, as well as After School Matters, Barnes tutors young artists in their craft. He currently works out of his studio at the Bridgeport Art Center in Chicago.

Children of the Wall Artist Talk and Concert in the Gallery: Bill Walker Suite