Wanna be part of the human race

The quest for knowledge and understanding of the world continues for the Chicago artist Shane Huffman in an exhibition of his photography, drawing and sculpture at the Hyde Park Art Center entitled Wanna be part of the human race. Over the last three years, Huffman has developed this body of work he calls “want to be part of the human race”, which investigates the various discoveries and accomplishments of man – both on the individual and universal levels. Ranging from the tragedy of the spaceship Challenger to the artist’s infant son reaching the stage of self-recognition, the ongoing series wrestles with the larger concept of time as an impartial force impacting natural objects and beings. The exhibition will also feature a new 12 foot long sculpture by Huffman made from fiberglass, clear stretchwrap, and adhesive. Wound tightly in streamline form, the work literally represents the trajectory of the artist’s body outstretched as it would be in the process of a swimmer’s flip turn. The sculpture eloquently captures the fluidity of infinite motion while seeming to make time stand still.

This exhibition is supported in part by The Orbit Fund.

Shane Huffman has been interested in the countless ways one can traveling through physical space and his work surveys the mental and physical state of the journey. Previous works have focused on the metaphor of swimming as a means to reach the moon, pushing the physical limits of the body to exist outside of the body. He received his MFA from the University of Illinois – Chicago and a BFA from John Herron School of Art in Indianapolis. His work has increasingly been exhibited in the U.S. and abroad as well as in several group shows at the Hyde Park Art Center, including Rupturing Beauty (2002) and Operation: Human Intelligence (2003). Wanna be part of the human race is the first solo exhibition of the artist’s work at the Art Center. 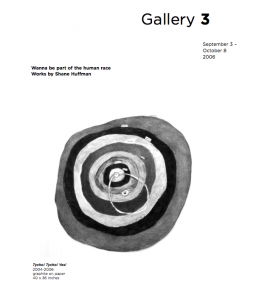