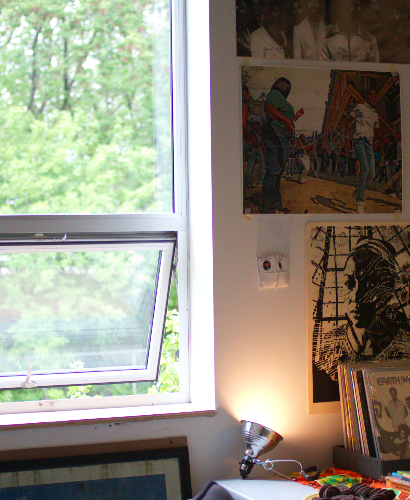 The Jackman Goldwasser Residency at Hyde Park Art Center connects artists deeply with their own practice in the context of our vibrant, multifaceted community. Each year, our program invites international, national, and Chicago artists and curators to complement their mode of production with increased attention towards reflection, reconnection, and research to spark new ideas and considerations of local and global art practices.

The Residency takes place in our Guida Family Creative Wing and supports both local and visiting artists and curators, and by linking practitioners from different communities, the program aims to galvanize an international network of artists, curators, academics, arts administrators, educators, practitioners, and researchers who we invite to consider themselves peers and colleagues participating in a conversation that transcends national, cultural, and political boundaries

About the Residency Program

Founded with the intention to expand the dialogue between Chicago and the rest of the world, the residency invites visiting artists and curators from around the globe to become part of our community.  These eight week residencies emphasize cross-cultural exchange and authentic dialogue and conversation surrounding international contemporary art practices.

In addition to connecting residents to the diverse range of resources, archives, libraries, artists and other practitioners in Chicago, the program builds relationships with like-minded arts organizations and resident programs around the world to expand our understanding of contemporary practice and create transformative opportunities for artists.

Robert E. Paige’s career as an artist, designer, and educator spans decades. His practice is shaped by his belief that art is everywhere and that everyone is an artist (whether or not they know it). Robert is inspired by colors and shapes that he sees in the park, in office supplies, out of his studio window, or in discarded plastic wrappers. His conviction that art is everywhere has informed a multi-decade design practice, including his popular design of the “Dakkabar Collection,” a series of textiles and home furnishings made in the 1970s inspired by his travels through the West Coast of Africa and sold in Sears stores across the country.

Robert formed Everyday Art in 1975 with the goal of inviting residents of Chicago’s South Shore community to make art in their own neighborhood in pursuit of an authentic community aesthetic. He says, “Everyday Art took the arts to the people, rather than the reverse.” Everyday Art continues to shape the work that he makes inside Studio 1, this year as a Radicle Studio Resident. When you visit his studio, chances are the artist will greet you with an affirmation, “A flower does not think of competing with the next, it just blooms!” With great excitement for the possibilities ahead, Robert invites you to visit his studio and to make something together. His only demand is that you “Bring Your Creativity!” when you visit him during his open studio sessions held during Center Days.

Robert E. Paige is in residency at the Art Center through December 2022.

What’s the application process? How can I get a residency at the Art Center?

How do I visit the artists in residence? Can I bring my class to visit a studio?

Yes! We are eager to make connections between our residents to our broad public. We hold Open Studios on a quarterly basis for all current residents. Check our Events page to find out when the next date is scheduled. Otherwise, contact Exhibitions and Residency Manager Mariela Acuña at macuna@hydeparkart.org to set up a studio visit or class visit. We also invite you to check in with us about individual artists’ studio hours, which happen weekly.

Do resident artists have public programming?

Yes, all residents are invited to present their work at Open Studios as well as in Artist Talks. Please check our Events calendar for upcoming residency talks or feel free to reach out to us to learn about upcoming residency public programs. Our programs are always free and open to the public.